Skype are on the move again, this time changing the way that they bill for calls to landlines. 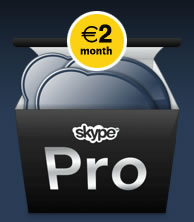 As is their want, it will be brought to in Europe, then rest of world during 2007.

The new charging scheme does away with per-minute charges for SkypeOut calls to domestic landlines, replacing it with a connection fee. This fee changes depending on the currency, with Europe paying 3.9 Euro Cents and the UK being spanked 2.9 pence per call, against the current exchange rate equivalent of 2.56 pence. All of these prices exclude VAT.

After the first five seconds of a SkypeOut call, the connection fee will apply.

Some countries will be cheaper, running at 1.7 Euro Cents, these currently include … Czech Republic (including Prague), Guam, Hungary (including Budapest), Israel (including Jerusalem), Luxembourg, Malaysia (including Kuala Lumpur), Puerto Rico and both Alaska and Hawaii in the United States.

This shift around isn’t a bolt out of the blue. Back in December a Skype Executive talked about these connection rates that became effective from 13:00 CET today.

The Skype Unlimited Calling plan in the US and Canada and the Talk for Britain campaign in the UK do not include a connection fee for national calls. Skype to Skype calls continue to be free and calls to mobiles will continue to be charged on a per minute basis.

Setup fees are usually bad news for people who make short calls, as the cost is front loaded, with the nattering classes gaining the biggest benefit from the flat rate.