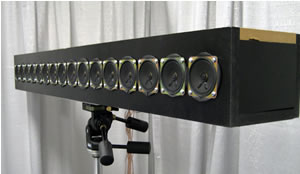 We spotted an interesting ditty about Microsoft Research getting excited about an array of speakers that they hope will irradicate the need for headphone wearing.

By varying the sounds and when the sounds are delivered to each of the speakers, they have been able to focus the sound to a specific location in a room. This provides the listener a clear rendition of the audio, while sparing a neighbour, 5 feet away from having to listen to it.

All of this is achieved without physically repositioning the speakers, which numbers 16 in this case.

In their piece, Discovery interviewed Ivan Tashev, software architect in the speech technology group at Microsoft Research in Redmond, Washington, who said, “The goal is to get rid of the headset completely.” A worthy goal.

The clever/different part of this implementation appears to be
The Microsoft team then hopes to tie it with a microphone array, to enable input too. Smart for voice controlling a system.

Background
We saw/heard similar technology demonstrated in London 3-4 years ago by a UK company. Mighty impressive it was too, with the array being used to provide surround sound from a flat speaker array.

Since then, this technology was picked up by a number of manufacturers, including Yamaha and the YSP-1 that we reviewed about a year ago.

On a more basic, analogue level, we’ve also seen this done before with an enormous shell-like structure that focused the sound at a specific location, enabling you whisper to the other party and clearly hear it 15 feet away. Quite a spooky feeling.