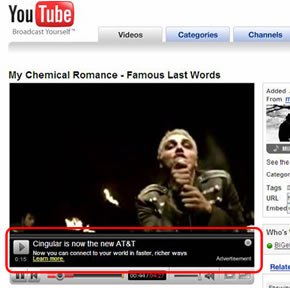 Following the purchase of YouTube by Google, we just knew that there would be advertising coming to YouTube sometime soon.

Many were surprised that there weren’t commercial banners to the top of the page, but they missed the obvious – Google is a master of online advertising and acts smart.

NewTeeVee has picked up that YouTube are now trying out inline adverts in the video playback area. While the video plays, text advert appear at the bottom offering a click to play a video advert. If this is clicked, the video advert plays on top. 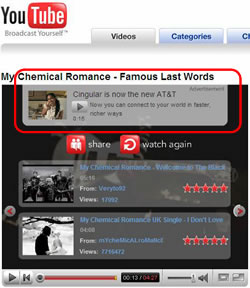 This is an important first step and can only get smarter. Once the number of advertisers starts to increase Google/YouTube will be able to target the adverts to the video or the profile of the video watcher.

We also assume they’ll be working on adverts that change as they are linked to the timeline of the video – plus ça change … for many of us who were building this kind of thing in 2000 using SMIL. We didn’t guess at that time that it’d take over seven years to get close to the public being exposed to it!

The smart addition of banners
It’s worth focusing on the banners at the top of YouTube and how they’ve been introduced. What was seen was banners tempting users to try additional service that were being rolled out. This was smart for a number of reasons – cool new tools (literally) headlined, but there’s a more important reason.

YouTube just hadn’t had advertising on it, and rather than plaster the whole thing with ads and lose the massive audience that YouTube had built (and Google had paid heavily for), by placing the non-commercial banners there, YouTube users get used to looking up there – rather than just focusing on the can’t-take-your-eyes-off-it video. Once they become used to it, commercial adverts can start to proliferate.