As we saw on Friday, Richard isn’t too happy with his Nokia N95. Today he tackles the GPS function and tomorrow the day after will be connecting his N95 to a computer, the 5Mpx camera and making phone calls.

GPS – Come to my rescue
Obviously, the narrow West End street where I work wouldn’t be a fair test, so I take it over the road to Golden Square in Soho. It’s Friday, it’s hot and sunny, if a little bit hazy, but I’m in a clear open space with no buildings for 50 metres on all sides. 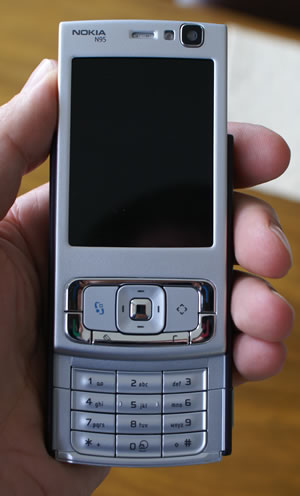 Okay, time to try out the device’s killer app – GPS and Nokia Maps. Having previously owned a Garmin Trek and an ill-fated Ipaq 6915, I’m familiar with the sluggishness of finding an initial navigating signal, so I’m giving the Nokia plenty of leeway to be a bit slow at first.

Open Maps… And… Error! Can’t find data connection (to download maps from on the go ‐ nothing comes pre-installed). Re-boot. Finds connection, away we go!

I SAID, AWAY WE GO! Ahem. The phone can’t hear me. I sit, expectantly in the sun, watching office workers munch their sandwiches for an inordinate amount of time whilst the N95 tries, and tries, and tries to find enough satellites to provide navigation. This is a moment you’ll get very used to if you’re an N95 owner. Waiting.

Well, something’s going on, as there seems to be a constant deluge of data being downloaded, but with not much else happening. Surely it’ll get a satellite soon? 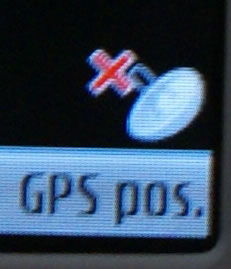 Here’s a symbol you’ll also get used to very quickly – a satellite icon in the bottom right corner with a big red X next to it.

I got impatient. I fiddled with the menu. Options / View / Satellite info, click. You now get a list of satellites the device is connected to, and a status bar showing the strength of the signal.

Should be, except I personalised the phone’s profile before I left the office, giving it an overall relaxing deep purple hue. Sadly it happens to be the same colour as the status bars. So all I can see is a list of numbers in white text showing the numbers of the satellites the phone is talking to – not a sign of the status bar.

Seemingly, I am connected to 5 satellites, but that clearly isn’t enough to triangulate a position (It is three corners that a triangle has isn’t it?).

It takes a full FIFTEEN minutes to finally tell me what I already knew – I’m in Golden Square! A minor triumph, to be sure.

Once connected, my position seems to play a game of hopscotch, happily jumping from one side of Golden Square to another.

Decide to take it on a walk. It’s not until two streets away that it decides to leave the square with me, and then hops around telling me I’m on Regent Street, (I’m not) before settling on Heddon Street – before I actually reach it! The signal then fails. I’m almost by the front door anyway. 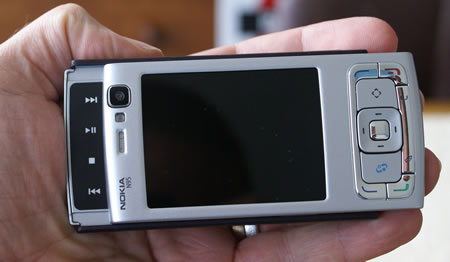 Maybe it’s not so good in built-up areas like cities. “But surely that’s the point of a handheld mass market GPS device!” I hear you cry ‐“navigating round the urban environment.” Well, if you don’t mind them all being a bit late, maybe that’ll be the case, but I can’t see it.

Give the GPS another try
I give the lovely animated GUI another try to placate my GPS woes. Hit the button. I knew there was a lag, but… no, it’s definitely not working anymore. Re-boot again, hit the button, now it works, after a 3 second delay ‐ this is another glitch that will present itself again and again. Pff.

Decide to leave it till I get home. Can’t resist another go on GPS on the way home though, so hopefully fire up Nokia Maps as I leave the office. Walk up a relatively-wide boulevard – Regent Street – towards Oxford Circus. As far as the N95 is concerned, it’s still sunning itself in Golden Square. Get to the tube and descend, turning off the still confused Maps as I go.

Arrive in Brixton, blinking in the sunlit clear sky, thinking this is perfect for more GPS tests. Except this is Brixton. Lumbering around Regent Street with the tourists brandishing a must-have electronic device at arm’s length might be the norm, but here one needs to take a different approach. ie, keep it in your pocket.

OK, let’s try the GPS in a vehicle
Decide instead on a stealth approach to mobile testing … get on the top deck of a double decker and sit at the front in the hope that the wide windows will give the plucky young device a chance to shine at demonstrating it’s skills at motorised navigation. This should be a pretty easy indicator of usability within a vehicle as the journey home is uphill, on wide roads with a clear view of the sky all the way.

Unfortunately, despite having fifteen minutes and apparently seeing again, five satellites, it cannot navigate. I give it a chance to perform, and when off the bus, keep it running the further 10 minute walk home. After many furtive glances at the big old red X, the poor mite still thinks it’s in central London. I put it on my window sill at home and after it gets its breath back, it finally tells me I’m at home. Woopdy diddly doo.

The first part part of this series dealt with getting the N95 going – the final deals with connecting the N95 to a computer, the 5Mpx camera and … err … making phone calls.