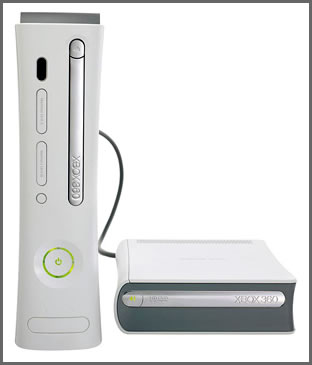 Microsoft have actually made a sensible decision, an external HD DVD drive for the Xbox 360 and it works.

With a recent software update the Xbox 360 was given HD support and suddenly 1080i and 1080p resolutions sprang to life (of course not all games support these new modes). Unfortunately the internal DVD is a bog standard DVD-ROM drive and it doesn’t support the new HD formats at all.

The external drive connects through one of the Xbox 360’s USB ports, it’s a shame there aren’t any rear sockets as the cable dangles out the front of the unit. Just plug it in, connect its power supply unit and install the software that comes with the unit and that’s it. It all just works. MS have been nice and included a DVD remote, though the normal game controllers work too.

Upscaled content
A nice feature is that the Xbox 360 will upscale content to whatever your output is set to (tested using 1080i), so a normal standard def DVD can be output at 1080i or 1080p. It works surprisingly well. There were very occasional artefacts or blocking – but it’s eminently viewable, even on a high action film (shame the film itself wasn’t). There are quite a few DVD players that offer some kind of upscaling feature, but it generally adds to the cost significantly.

Silence is golden
DO NOT EVER watch a film with quiet bits in it. The major downside to this set-up is that the Xbox 360 sounds like a train rumbling through your living room, it’s incredibly loud. As soon the the film quietens, there it is. You cant quite block it out.

Current Xbox 360’s also don’t support HDMI (the newly announced Elite will) so the best resolutions require component video and that means a separate audio output. The cable does have an optical out, but it doesn’t support newer digital modes like Dolby TruSurround.

Verdict
For around 130 quid, a bargain HD-DVD drive that upscales as well, but it’s bulky and noisy.