Miglia who are known for their TV dongles have introduced two updated models, TVMini Express and TVMax+ which are really the same as the TVMini and TVMAx but with new software.

Bye Bye Elgato EyeTV
The products used to ship with EyeTV but this has now been dropped in favour of their own software. Miglia say this is due to Elgato not supporting their real time encoding on the TVMax (i.e. EyeTV takes in a video feed, stores it and then converts it, while TVMax supports hardware encoding to a variety for formats). 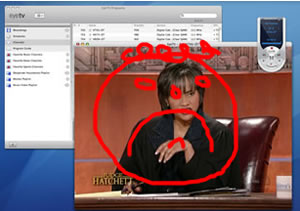 The new software works with all the Miglia decoders and offers similar functionality to EyeTV.

TVMini Express
This is a standard USB 2.0 DVB-T tuner, the software now bundled is known as “The Tube”. It can play and record Freeview channels and also works with the Apple Remote.

TVMax+
The box is around the same size as a Mac Mini or AppleTV and is in the same white and aluminium sides. It has a TV tuner (with aerial and cable connectors) but also video and s-video connections so it will work with a DVD or other video source.

It connects back to a Mac using USB 2.0.

Various video formats are supported including MPEG-2, MPEG-4 and DivX. Since compression is performed inside the box using hardware it will save to disk immediately in the right format without having to go through a software compression phase. 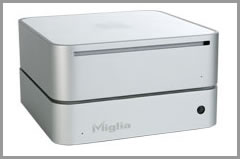 The software also works directly with iTunes so stored video will appear on any connected AppleTVs.

H.264
This is the MPEG-4 variant that iPods and other devices use. Miglia are coming out with a USB 2.0 dongle that does hardware compression. This will work with Miglia software, but should also allow other developers to utilise it for their own software, so a DVD could be ripped and on-the-fly converted to H.264 for use on an iPod.

Unfortunately details on this are scarce as it hasn’t been released and only a prototype (in black rather than Miglia’s normal white) was seen.

Verdict
The TVMini has always been a useful DVB-T tuner, it needs a good signal and the supplied aerial isn’t much. The new software works but as it was only briefly demo’ed it’s hard to tell how well it compares to EyeTV. The price drop is welcome though.

The TVMax+ is a new product, again only briefly demo’ed but the new software will make a huge difference as it utilises the hardware compression in the TVMAx itself, cutting down the time it takes to make an iPod or AppleTV compatible video.

The H.264 hardware dongle will be very useful when released.