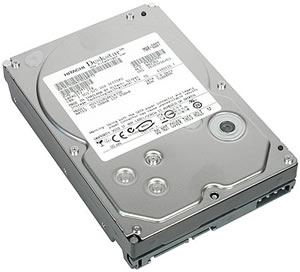 There’s a common thought that Moore’s Law in relation to processing power has now become irrelevant, due to the now-attained high processing speeds. In it’s place is a form of Moore’s Law for storage and how important it’s rapid growth is.

In proof of this new Law, Hitachi have released the first 1Tb (1,000 Gb) hard drive named the DeskStar 7K1000. Tom’s Hardware have been running tests on the new drive and have recently reported on it.

There’s 9 pages of the review which reach the conclusion that in terms of the cost per gigabyte it’s not the best value hitting around £230 / €330, which clearly doesn’t compare well with £100 / €150 that 500Gb drives now give.

The reviewers, Patrick Schmid and Achim Roos, feel that having a single 1Gb drive will be easier to handle, but as a data drive rather than one to run the operating system from.

Their view is to hold on for a little while until other manufacturers get their 1Gb drives out, such as Seagate, which will come with a five year warranty, that is lacking in the Hitachi.