The 800-pound gorilla that is Microsoft is trying to get the world to shift from the global-standard JPEG format to their relatively newly-announced format, HD Photo. 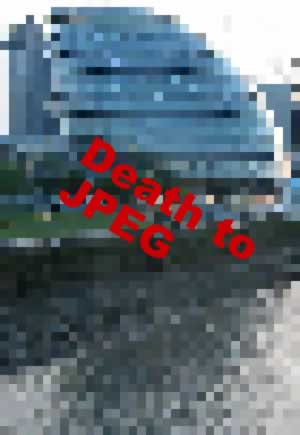 Last week Microsoft went on a PR offensive to promote the new format, despite them having published the specification in November last year.

It’s claimed that HD Photo offers twice the efficiency of JPEG – meaning the same quality of photo will take up half the amount of storage.

Despite the HD at the start of HD Photo, there is no connection to the HDTV standard or format.

It’s not surprising to hear that Windows Vista has native support for HD Photo images, and it can be easily added to Windows XP. Microsoft have also released a beta version of a plug-in for Adobe Photoshop, enabling people to save files in HD Photo format. They’ll not be charging for it, even when it’s released.

Frankly we think Microsoft would have stood a better chance of success with HD Photo five plus years ago, before the price of storage, both of hard disks and portable memory formats, started plummeting. The same applies for the claims of needing less processing power to decode HD Photo images, as most new computers have more processing power than their owners know what to do with them.

Their best chance of success will be to try and get photographers who shoot in RAW (uncompressed) format to save their images down to HD Photo, tempting them with less loss in their photos than JPEG currently provides.