The next-market-to-disrupt target of the Skype/Kazaa founders – TV – has it’s latest news. The Venice Project’s working name has been changed to Joost, continuing their penchant for picking weird names – always a benefit when you want the domains(!). 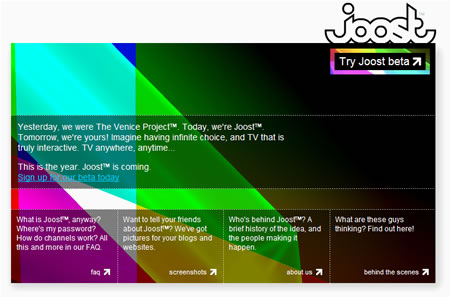 As to the source/root of the name … ? Well it could be that their massive fans of ’80s video game Joust or perhaps it’s a reference to the German for a friendly ‘goodbye’, Tschüss. Who knows? FYI – It’s actually pronounced Juiced.

We’ve been fiddling with the Venice Project, sorry, Joost for a couple of weeks now, since Christopher Wood very kindly sent us an invite to join up. 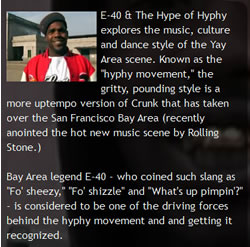 We whacked it on an older (1.5GHz) machine and found that it really didn’t have the horsepower to run it properly. It’s a pretty greedy little number, even running out of steam on a 2.5GHz. The buzz around us beta testers is that currently, it _loves_ taking power/resources.

Clearly the Joost crew are seeing this as a product for the future (not a bad assumption), that will need to have a current processor to run it on. Queue computer and chip makers cheering and clapping.

A couple of beta testers are pointing and declaring that Joost will be the first failure of the founders. We think that it’s waaaaay to early to be calling that. Be patient my headline grabbing-friend and see how it turns out.

Let’s not forget 1) this is still in Beta, 2) Windows Media Centre was a total dog throughout many of its incarnation, taking years to get to the point where it was even usable.

One thought on “Joost: The Venice Project Renamed”