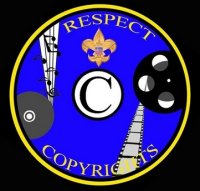 Coming straight from the you-must-be-having-a-laugh folder, news reaches us that the Los Angeles Scout group is introducing a new merit award — the Respecting Copyright Patch. We kid you not.

The MPAA, the film industry trade body, has been instrumental in the development of the structure of the programme. To be awarded the badge, the young scouts will need to learn the basics of copyright law, five ways of identify copyright material and three ways that copyright material can be ‘stolen’.

I know, I know, it just sounds like one big fun-fest doesn”t it, but the fun doesn’t end there for those lucky kids. There is also a compulsory activity with a choice between either visiting a film studio to witness the number of people that are involved with the production of films (therefore helping them understand how many people would be affected if the whole thing closed down), or to create a public service announcement warning of the risks of ‘copyright theft.’

“We have a real opportunity to educate a new generation about how movies are made, why they are valuable, and hopefully change attitudes about intellectual property theft,” Dan Glickman, chairman of the Motion Picture Association of America told the press.

As veteran copyleft campaigner Cory Doctorow over at BoingBoing asked, how balanced will the tutoring of this patch be? Will the young and clearly impressionable scouts also be told about subjects such as Creative Commons?

There are 52,000 scouts in the LA area, many who have family members involved in some way with the creation of films, which is bound to help in its uptake of the patch. It is understood that the MPAA hope to take this ‘opportunity’ to a wider audience. Their plan? Expansion to the rest of California early next year, then to America as a whole.

The patch that they would earn, which is rather tacky to say the least, shows a (c) copyright symbol in the centre, with the left side displaying a CD and to the right, a film reel.

Just how many other industries are given the opportunity to spread their message through the American Scouts is unclear. To us it sound like a worrying trend.