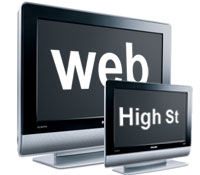 UK Internet shoppers are spending up to 50 per cent more on electrical goods than they would on the High Street, according to new research.

A new study by market research firm GFK found that the average price spent on like-for-like products was higher on the Internet because tech-savvy surfers were shelling out for higher specified products.

For example, the research firm found that average price of an LCD TV bought on the Internet was a hefty £867 – 32 per cent higher than the average High Street spend of £657.

In the massively lucrative consumer durables market – worth an eye-watering $42bn – the Internet has doubled its share from four to eight per cent of overall sales, giving online shops a whopping £3.36bn share. 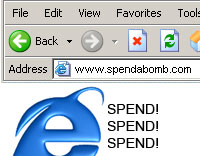 Not surprisingly, popular consumer products like hard drives and mp3 players have been big movers, but GFK also noted that consumers are increasingly shelling out for more diverse products online, such as bread makers and dishwashers.

James Randall, commercial director at GFK, said: “Over the last 12 months the internet fulfilled its hype for retailing. What is particularly interesting is how consumers’ buying behaviour differs on the internet. It is not surprising that internet shoppers are more technically savvy than the norm.”

“However, what is interesting is that, as they are early adopters, when they buy products they usually spend more money on the internet as they buy the latest, higher specification items,” he added.