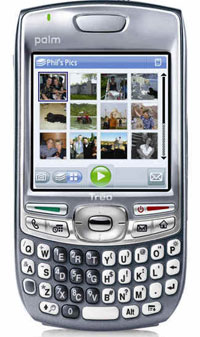 The GSM/GPRS/EDGE phones will be offered in a range of attractive colours (Graphite, Copper, Crimson and Arctic), weighing 23g lighter than the last PalmOS Treo, the 700p, and measuring up at 6mm longer and 3mm thinner.

Like the Windows-powered Treo 750w released earlier this year, the Treo 680 comes without the pocket-bulging, iconic chunky antennae, something which Palm thinks will have a positive impact on the European market.

The Treo comes with a large and bright 320×320 screen and the well regarded full QWERTY keyboard, with a raft of multimedia functions including an integrated digital camera, Bluetooth 1.2 , MP3 player, video recorder and player.

Onboard, there’s 64MB of user-available storage – nearly three times the capacity of the original Treo 650 smartphone – with expansion card support up to 2GB.

Although the Treo 680 is still lagging behind with the latest technology – there’s still no W-CDMA or Wi-Fi support – its superb user-friendly interface still puts it streets ahead of some higher spec’d phones.

Software
Like its Palm OS predecessors, the 680 displays text-messaging conversations as IM-like “threaded chats,” a fabulous feature that should be introduced by law on all phones.

The phone also lets users respond to calls by firing off a preset text message (“bog off weird stalker person”), and there’s support for three-way calling. 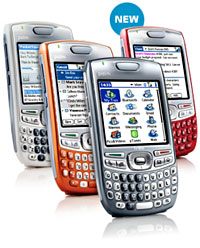 Along with the usual bundled applications for e-mail, Web browsing, messaging, multimedia, calendar and contacts, there’s a special version of Google Map for the Treo.

Sadly, us in Britland will have to wait for a while as the program currently only offers maps for Canada, France, Germany, Italy, the Netherlands, Spain and the US. 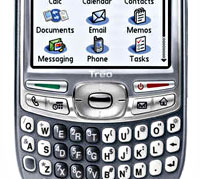 Palm has also announced that it will be partnering with several media companies, including Yahoo, Google and blogging firm Six Apart, to make their products available on the new device – these will join the enormous back catalogue of commercial and free software that’s already available for the OS.

Availability
Palm head honcho Ed Colligan said he expects the new smartphone to be available around the world by the end of June, 2007, “competitively priced with comparable smartphones in the marketplace,” with the price rumoured to be around the $200 mark.