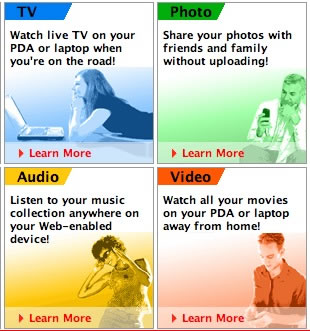 Orb MyCasting has been grabbed by Nokia to be bundled in with the Nokia N80 Internet Edition, in the US only.

When US N80 owners are swanning around, they’ll be able to watch live TV, videos, listen to music and podcasts and video images on their PC. Not just that, but they can set programs to record on their PC from their mobiles.

The TV and media companies have not, to say the very least, been particularly keen on letting people do this. We’ll see if they come out against Nokia.

Back in August this year, Orb MyCasting were keen to “share”, that 19 months after the service was launched, they’ve had over 1.5m hours of digital media transfered over their service – equivalent to 125 years of media-idge. Interestingly up to 45 minutes per user per day, on average.

Orb has similar deals with companies such as AMD, Vodafone, Hauppauge, Intel and Creative Labs.