How fantastic is this? A couple of turbo-code monkeys have written a Commodore 64 (C64) emulator that runs within Flash on a Web browser.

Darron Schall from Pennsylvania and Claus Wahlers from Brazil have been working together to create this beauty.

The Flash code emulates the C64 main CPU, the 6510 (a derivative of the 6502) and most of the other chip-ery, allowing the loading of old Commodore 64 programs and run them.

The C64 was a revelation when it was first released in 1982, opening up personal computing to a whole new generation, offering the shockingly large 64k of RAM and the ability to load and save programs to a trusty audio tape recorder.

Software emulating old computer circuitry has been around for quite some years, with MAME (Multiple Arcade Machine Emulator) being a very strong example that’s coming up for its 10th birthday. 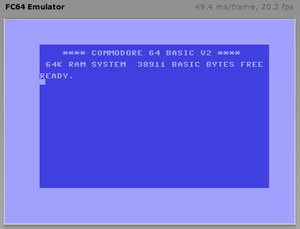 MAME was a huge revelation when it first arrived, letting users load up the ROM sets from old arcade machine and play them as if it was on the original hardware.

One of the problems with the original approach was a need to write a different version of the code for each hardware platform. This, over time, lead to MAME on Dos, MAME32 on Windows xMAME for unix-based machines, and MacMAME for Mac OS X.

The benefit of writing it in Flash is that, by writing it for a software platform (Flash), it should work on all machines that run Flash, without it needing to be re-written. 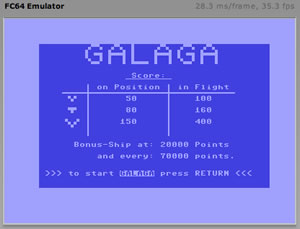 All of the emulators are a clear demonstration that the power of hardware has increased tremendously.

Software like FC64 reminds us that any hardware, or software that runs on it can, in time, be emulated as processors continue to become powerful. Beyond the fun of video games, security system can also be emulated, an argument used by those who oppose their blind use.