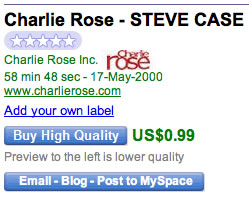 Google Video has been serving videos to the Internet population for over a year and a half now, both paid download via their Video Store.

Today, when researching a story, we noticed that they’ve also brought in a third model – sponsored playback, a new one to us. Never let it be said that given an opportunity to raise advertising dollars, Google aren’t at the forefront.

Above the video being played back is a banner containing the logo of the advertiser (in this case HP), a couple of lines of advertising copy and a couple of links.

How the financial on this works isn’t clear, but we’d assume that the owner of the contact will receive some payment from the sponsor, via gogole, for each video that is watched, in a similar way that the record companies get paid a small number of pennies when a people play their artists music on a monthly music subscription service.

One interesting feature is that the video is still available for purchase, as the version that is shown is at a lower quality than the for-sale version. Google call the for-free version Preview, although for our purposes, retrieving information from the programme, this is all that we’d need. You could see that other types of programs would benefit from higher resolution. 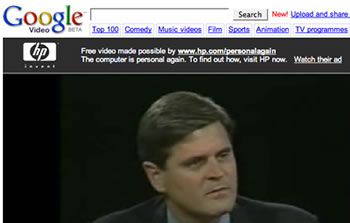 Clicking on Watch their Ad link opens a new browser session and plays the video advert from … Google Video. All very neat.

It is interesting to note that the cost from Google, in this case 99c, is significantly less than the price when purchased from Charlie Rose’s own site, which is available on DVD or VHS at at least $30.

What is powerful about this rendition of advertising with video content is that the brand is associated with the content, in our case a well known and respected US journalist, and the viewer is given the opportunity of watching the content. They aren’t forced to watch it, as we commented about at the end of the recent review of GoTuit, and are they given the opportunity to stop watching it whenever they feel like it.

Example of Google Video being sponsored by an advertiser.