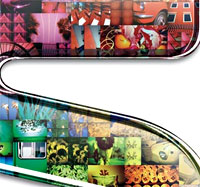 As expected, Sky has released details of their new “free” broadband promotion, which offers their 2Mb Base package for nowt.

But skinflints looking for a free feast of broadband take note: you only get the service if you’re already an existing SkyDigital network customer, and it comes with the additional sting of a £40 activation fee.

I’d rather jack
Punters who don’t know their phone jack from their Monterey Jack can also expected to be thwacked around the head with the extra optional £50 fee to get their home install sorted by Sky.

Users of the free broadband deal will find their downloading pleasure limited to a 2GB monthly usage cap, although they can upgrade to the ‘MID’ package, offering up to 8Mbps on a 40GB data cap for a fiver a month, with a lower £20 activation fee.

There’s also a ‘MAX’ option, which gives ‘unlimited’ downloading at a speedy 16Mbps with no activation or home install costs, all for a tenner a month.

For users out of a Sky network area, there’s the pricey ‘Connect’ option which offers up to 8Mbs connectivity, 40GB usage cap, £40 activation fee and £50 home install for a distinctly upmarket £17 per month.

All the offers include a free wireless Sky broadband box.

Growing the network
Easynet (owned by Sky) now owns a LLU network covering roughly 28% of UK homes, based primarily inside urban/city areas, with the company expecting to reach 70% coverage by the start of 2008.

Sky reckons that its broadband service – currently swallowing up £400m of operating profits and costing £250m in capital expenditure – will start to hit the break-even point sometime between 2009 and 2010.

30 per cent of Sky customers on broadband
The company also said that it expects 30 percent of its approximately 8 million customers to be signed up to its new broadband service by 2010.

Sky’s chief executive James Murdoch claimed that many of his rivals had been overcharging their customers, “A lot of incumbent players have been charging a lot of money for a long time for not a lot. It could be uncomfortable for them.”

“We can see huge growth in this market from a revenue perspective and for customer loyalty. We can also grow market share,” he added.

Jon Florsheim, managing director of Sky’s customer division, was ready to go even further, insisting that research showed that Sky would pick up new business from competitors.

“The bloodbath is not going to be on our front lawn,” he added, in his best Clint Eastwood voice.

It wasn’t all joy and happiness in the City after their announcement though, with Sky’s shares slumping 3.9% after the announcement of the new broadband service.