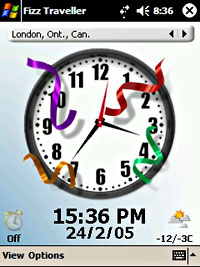 Loading up the application on our i-mate JAM, we were taken to a large clock with some daft confetti stuff stuck all over it that promptly sent us looking for the ‘how we did get rid of this’ option.

A rummage through the menus revealed that the developers were pretty keen on the eye candy, with customisation options letting users fiddle about with various themes, background images, clock styles and colours. 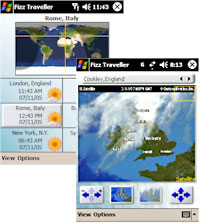 Great if you like that kind of thing, of course, but we’d be happier with just one clean, crisp and professional interface than a load of bubbly, baubly spinning things.

We found the overall interface a bit of a pain too, with an animated menu system needlessly complicating matters, although we were impressed with the information that could be (eventually) displayed.

On a more positive note, the Today plug-in that ships with Fizz Traveller was a well designed addition that could be configured to show the current date/time and weather information, and cycle through other modes.

Talk about the weather
The program comes with 58,000 pre-programmed world wide cities, with the option to display more detailed time and weather for six user-selected ‘Favourite Cities,’ along with a pretty little map. 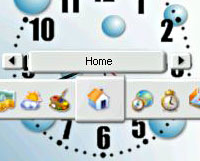 Sadly, you couldn’t zoom into the map so it wasn’t the greatest of travel aids.

The weather information was, however, impressively comprehensive, offering min/max temperatures, precipitation, forecast maps, satellite maps and 2/7 day forecasts, as well as an “Airport Delays” option which didn’t seem to be particularly useful.

More useful was the currency conversion section which, like the weather forecasts, could be configured to update wirelessly at preset intervals.

Wrapping up the feature set was a mixed bag of conversion tools for temperature, length, weight, area, volume, speed, power and torque.

We can’t recall the last time we found ourselves needing a program to convert horsepower into Kilowatts when we were on out travels, but we’ve certainly got one now.

Conclusion
There’s a lot to like about Fizz Traveller, with the program offering lots of useful, travel-related functionality and a well executed Today plug in.

We liked the weather maps and there’s no denying that the interface has been buffed and polished up to a very high standard with lots of options for folks who like to customise their app.

The only problem was that in their quest to produce the prettiest travel application around, usability occasionally flew out of the window.

Compared to its chief competitor, WorldMate 2006, the program often felt clunky and slow, and at times we found the pop up navigation system downright annoying.

It’s not all bad news for the Fizz crew though, as the program offers similar levels of functionality to their rival but retails for substantially less ($20 against WorldMate’s $35), so we’re sure some will be prepared to put up with the quirks of the interface to save themselves a few bob.