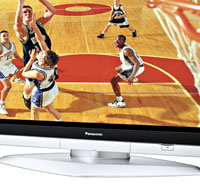 People still waiting for those wall-sized flat screen TVs that were promised in sci-fi books will be able to take a step closer to their dream with the announcement of Matsushita’s thumping great 103-inch panel TV.

Korean electronics company Matsushita, which owns the Panasonic brand, plans to unleash the plasma whopper by the end of the year, and says that it has already taken orders from the US.

First demo’d at the Consumer Electronics Show in Las Vegas in January this year, the 2.3 x 1.3m behemoth weighs in at a wall-straining 215kg – making it bigger than a double-sized mattress and almost as heavy as an upright piano.

Panasonic haven’t announced how much the plasma monster is going to cost, but there’s no doubt it won’t be for the likes of us mere mortals (as a rough guide, Matsushita’s current 65-inch screen costs a leg-crossing $7,500 in Japan.) 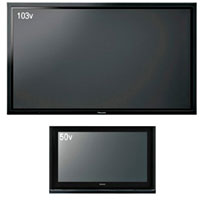 Panasonic reckon that they’ll be able to shift around 5,000 of these enormo-displays in the first year, although they added that probably only 20% of takers will be TV viewers, with the majority buying the display for use as electronic billboards, or displays in studios and corporate lobbies.