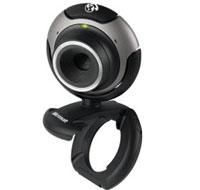 Microsoft has slipped out a pair of branded Webcams designed to offer tight integration with their hideously popular Messenger service.

Their first foray into the wonderful world of Webcams, Microsoft’s new LifeCam Webcams are designed to be the perfect match for the updated version of MSN Messenger, now called Windows Live Messenger.

Rather like Apple’s iSight and iChat, you might remark – and you’d be right, except that these Webcams have none of the sleek design flair of the Mac offering.

Show me the cameras
The cheaper of the two cameras, the VX-3000 is a fairly bog standard affair, offering bottom-end 640×480 video with a 1.3-megapixel camera for stills.

Its big brother, the VX-6000 promises to deliver hi-def video recordings up to 1280 x 960 pixels and still photos interpolated up to 5MP, but remember, interpolated just means ‘small image blown up large by software’ so don’t go expecting to produce high quality large prints from the Webcam.

Both cams also come with built in mics, a wide angle lens to let social butterflies fit their vast armies of chums in frame and built-in cheesy video effects like falling snowflakes or twinkling stars.

Simplifying your video experience. Or something
Microsoft is claiming that their new cams are going to “dramatically simplify the video communications experience.”

Apparently, this will be achieved by the inclusion of a button on top of the camera that launches buddy lists on-screen and a new dashboard application built into Windows Live Messenger that lets users pan, tilt and zoom the Webcam without having to remove their buttocks from their computer chair. 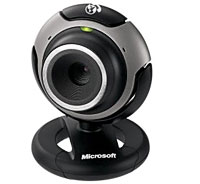 Here’s Microsoft’s Consumer Productivity Experiences Executive Vice President (who dreams up these job titles?) Tom Gibbons to explain how LifeCams are part of a new initiative by his company to tie in hardware products to Windows Live services.

“Microsoft Hardware and Windows Live are defining that movement with a new approach to integrated products and services that give consumers the power to have a richer digital communications experience and make everyday events extraordinary,” he waxed, lyrically.