It’s rare that there are inconsistencies in the Digital-Lifestyles clan, but there’s one subject that brings a split consensus. Some of us, me included, think that different forms of controllers for video game is a trend that is just starting – a more natural way of working with the games console is inevitable, like the Reebok CyberRider we reviewed at the start of 2003. Others think they’re just a plain daft idea, to be forgotten in the twitch of a joystick.

Guitar Hero on the PS2 has re-ignited the subject as it features a guitar controller modeled on the classic Gibson SG. 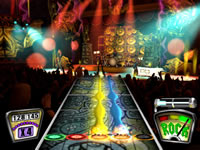 Rock-power-fiends will set their fingers a flyin’ around the five frets, strum-bar and whammy bar. Beyond the buttons, there’s an alignment sensor used to gain extra style points when it’s played vertically. Expect the inducement of dizziness as heads are thrown around in a frenzy.

Gameplay for single players includes a ‘career’ mode, taking you from playing small indie club on your path to the rock-mega-god status of playing stadiums. 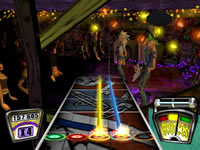 With the Multiplayer mode seeing two players facing-off in what are described as ‘an electrifying series of guitar duels’, it’s quite unclear what will happen over artistic differences, or even usages of the power axe (otherwise known as guitar) as there’s only one shipped with the software.

The game format will be familiar to anyone who’s ever played or even seen a game like Dance Dance Revolution. Different coloured objects move down the screen towards you and actions have to be performed to match these object. 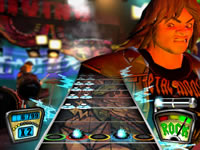 Initial previews have been strong and it’s gained from PR boosts with the like The Darkness talking about on MTV Overdrive. It looks like there’s high hopes from this one.

Guitar Hero will be released in the UK in April 2006, priced £49.99 (including SG controller). Rollout throughout Europe will follow shortly.

We’re looking forward to getting our hands on it.

Guitar Hero Games
(There’s a video of The Darkness talking about Guitar Hero on MTV Overdrive, which due to Geo-locations filters, we are unable to see in the UK as ” MTV Overdrive is currently unavailable in” our “territory”>