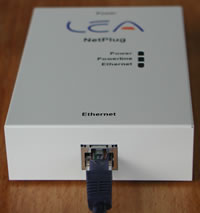 There’s a growing reliance and expectance of networks in the home to handle all of this digitised media that we want to chuck around our homes, from room to room.

Many houses that were constructed recently, or depending on the country you live in, within the last three years, are network cabled with Cat5+. The majority of us who live in houses over three years old find they have a problem.

WiFi has helped many, but many houses in Europe have walls of considerable thickness, and without regular repeaters, WiFi can struggle to provide complete coverage.

Usually beyond that there the idea of retro fitting of Cat5 cabling to a house. Given the level of mess created, this usually doesn’t go down too well with the neater partner in a relationship.

Power Line Communication (PLC) has been designed to fill this gap in the market. PLC uses an adaptors that plugs into the houses main circuit and the network, using the house’s power cabling and the network cabling.

You may think that plugging your computer into the mains power by unconventional means is just asking for trouble. People used to think that electric washing machines were a bad idea as ‘electrics and water do not mix’. However, PLC has been around for some time now in the form of narrow band, and since the year 2000 a broadband communication channel has been available. 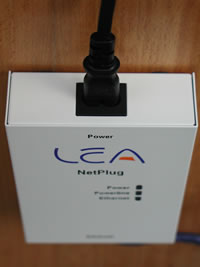 What’s involved in getting the network setup? Basically nothing. Take the power lead, plug it into one end of the NetPlug. The Ethernet (RJ45) goes in the other end.

With the second computer connected with the same 2-minute setup, you’re able to communicated between them, if they’re network software is setup.

If you’re OK running without encryption, then that’s all you need to do – no software required.

The only time you need to resort to using software is configuring the encryption. This uses 56 bit-DES encryption, which provides reasonable protection from those who aren’t paranoid about been snooped on.

Up to 16 NetPlug’s can be used on the same network.

The NetPlug is based on HomePlug v1.0.1 standard and they report a raw data speed of upto 14Mbps. These speeds are fine for most home computing needs including Web-browsing activity (your DSL connection is likely to be considerably slower than this anyway).

Testing
I checked to see if both computers had Internet access and could share files. They did and could, without any set-up programs or reconfiguration. They just worked.

There are some who say that vacuum cleaners interfere with PLC signal, so I did some cleaning in the vicinity of both computers, I even plugged the vacuum cleaner next to the PLC device. There was no notable lose in connection speeds.

Benefits
It is a lot faster to plug a device into a wall than it is to lay a single cable. It creates an instant network at the flick of a mains switch. The real benefit will come to people who use mobile networks such as LAN (Local Area Network) party goers. These people have to build a multi-computer network before the party even starts. Bring a PLC device and abolish trailing cables. 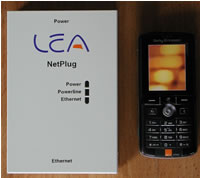 There are different ways of creating a computer network. A traditional wired network is the cheapest but takes the longest time to set-up, unless you do not mind trailing cables. PLC devices cost more but are the quickest to set-up, and do not require any new cables. Wireless networks are the most expensive but can take less time to set-up than a traditional wired network, and offer out of doors networking.

The styling isn’t going to get you excited, but over time, we’d imagine that PLC devices are going to become more ‘home friendly’, probably incorporated into the plug. In January 2006, LEA released a home-focued version of this – it’s smaller and looks a lot better.

Score 92%
+ve: Anyone can use it. Setup near instant. No problems running.
-ve: Styling could be slicker. Encryption setup only on Windows.