P2P network, BitTorrent has signed an agreement with the Motion Picture Association of America to collaborate on stopping Internet piracy.

After a press conference, a joint release was released by BitTorrent founder and CEO Bram Cohen and MPAA chairman and CEO Dan Glickman announcing that BitTorrent have agreed to remove all links directing users to pirated content owned by the seven MPAA member companies.

The agreement will effectively prevent bittorrent.com from locating unlicensed versions of popular movies, making it harder for freeloaders to find online illegal copies of films.

“BitTorrent is an extremely efficient publishing tool and search engine that allows creators and rights holders to make their content available on the Internet securely,” Cohen said.

“BitTorrent Inc. discourages the use of its technology for distributing films without a license to do so. As such, we are pleased to work with the film industry to remove unauthorised content from BitTorrent.com’s search engine,” he added.

Thousand of BitTorrent fans the world over will be clenching their fists and shouting “Traitor! You’re doing deals with the Devil,” while other more balanced, less angry-types will be saying “Smart move Bram, you’ve built a technology that they cannot stop and the fact they’ve done a deal with you proves that. Hey and you’re not getting your shirt sued off your back.”

In September, Cohen revealed that his company had raked in $8.75 million in venture funding to develop commercial distribution tools for media companies, and the MPAA deal looks to be part of a strategy to make the technology more attractive to Hollywood moguls – no doubt with an eye to future lucrative movie download deals.

With an estimated 45 million users, the BitTorrent technology pioneered by Cohen does its clever stuff by assembling digital files from separate bits of data downloaded from computer users all across the Internet.

The decentralised nature of technology makes it the easiest, most convenient way to fill your hard drive with dodgy movies galore, while making it harder for Hollywood to find and identify the movie swappers.

In an attempt to stop the piracy, the MPAA has been slapping lawsuits around like confetti during the last year, successfully closing down 90% of targeted sites using the BitTorrent protocol for illegal distribution of movies. 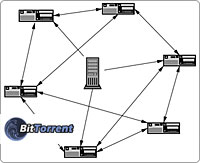 The MPAA claims that the film industry lost $3.5 billion to movie piracy last year, with a recent study predicting the figure to jump to $5.4 billion this year. The MPAA claim these losses are excluding revenue lost through online file-swapping, so the true figure could be even higher (although other will say the figures are already gloriously exaggerated).

With tears welling up in their eyes, the MPAA said that film copying hurts hundreds of thousands of employees dependent on the movie industry, including sound and lighting techies, carpenters, cinema staff, video store employees and quite probably the popcorn sales assistant too.

But not, we suspect, the fatcat industry bigwigs.