A Hong Kong doleboy has been slapped down by The Man after he was found guilty of distributing three Hollywood films using BitTorrent’s peer-to-peer file sharing technology.

A report in the Taiwanese English-language newspaper The China Post named unemployed Chan Nai-Ming in what is believed to be the first case of its kind.

The 38 year old used BitTorrent to distribute “Miss Congeniality”, “Daredevil” and “Red Planet” and heard the knock on the door from customs officers in January 2005.

Nai-Ming pleaded not guilty to copyright infringement but was convicted after a four day trial. He will be sentenced on 7 November, 2005, although some Websites are reporting that he’s already been fined $641 (~£360, ~E529).

The Hong Kong government is claiming the action as its first successful action against peer-to-peer file sharing, with Hong Kong Commerce Secretary John Tsang confident that it would deter other potential file-sharers.

Since the arrest, the Hong Kong customs department said that illegal file-sharing had plummeted by 80%. 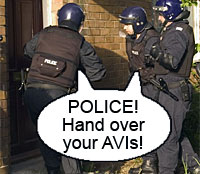 The OpenSource BitTorrent software has become one of the most popular means of downloading large files, with the technology allowing users to download fragments of a large file from multiple users, rather than in one hefty lump.

Initially, the program needed centralised tracker files to manage this process, but BitTorrent’s creator, Bram Cohen announced that they were no longer needed in the last year.

As it’s grown in popularity, BitTorrent has garnered the unwelcome attentions of spyware and adware pushers along with the corporate might of recording companies and movie studios.

Thousands of peer-to-peer downloaders using software like Napster and SoulSeek have already been sued for copyright infringement over the past few years, with the US Supreme Court ruling last year that peer-to-peer makers could be sued if they encourage users to copy material.

We expect the corporate-profits-defending big boot of The Man to be seeing a lot of door-kicking action in the upcoming months.