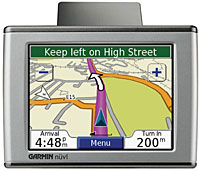 Quickly earning a We Want One Now Please accolade, Garmin have announced the nüvi, a feature packed GPS travel assistant the size of a deck of playing cards.

Songs can be loaded onto the SD card using drag-and-drop. 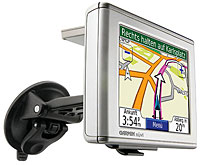 Garmin are claiming that the built-in lithium ion battery offers between 4-8 hours of battery life.

There’s also optional language and content support from software packages such as the Language Guide and Travel Guide.

With the guide, travellers can look up and translate more than 17,000 words or 20,000 phrases per language with a text-to-speech interface letting users talka da lingo.

The optional Garmin Travel Guide has a ton of travel information on tap including reviews and recommendations for restaurants and tourist attractions.

The information is integrated with nüvi’s GPS functionality, so that hungry drivers can be guided to the nearest eatery, with the nüvi’s text-to-speech functionality keeping eyes on the road.

The nüvi comes in two flavours:

Sold exclusively in Europe, the nüvi 300 comes with approximately 200 MBs of internal memory for storage of supplemental maps, MP3s, and audio books (available from Audible.com). Pricing to be announced.

This top of the range configuration contains full European mapping and is compatible with the GTM 10 FM TMC traffic receiver, making it easy to calculate new routes to avoid snarl ups.

The nüvi 350 comes with an A/C charger and provides around 700 MBs of internal memory for storage of supplemental maps, MP3s, and audio books.

Garmin have only announced domestic US pricing so far, with the North American versions (pre-loaded City Navigator NT maps of the US, Canada, and Puerto Rico) retailing for the rater precise amount of $969.22 (£555, €810).

Availability is expected sometime in November 2005.