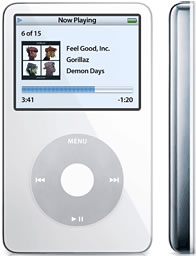 After weeks of frantic speculation that a video-capable iPod was on the way, Apple have sure enough announced the very thing at their event in the California Theatre in San Jose and BBC Television Centre in the UK.

Steve Kennedy has been at the UK event for us. There was no live updating allowed during the event, so updates have been patchy and details were slow to emerge. 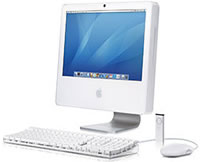 ?Not quite the world shattering device that was expected, but from those who have seen it “sexy.”

iTunes 6 – Upgraded again after the 5.0 release of a few week ago. The big change. As expected from our first video of itms, downloadable video. A deal has (~£227~€331) been done with ABC/Disney to let five shows (Desperate Housewives, Lost and three disney shows currently) to be paid for and downloaded the day after they’re on TV – only in the US currently. Is there any co-incidence that the UK launch happened in the BBC TV centre? 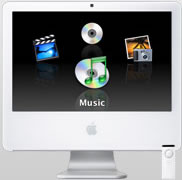 “It’s never been done before, where you could view hit TV shows and buy them online the day after they’re shown,” Jobs said. While this may be true that people have not been able to _Buy_ it, but let’s not forget that the BBC has the iMP trial running, where you can get shows straight after they’re shown – but for nothing.

We imagine there’ll be lots of lost sleep in Redmond tonight.

We’ll have a more considered piece on the impact of the announcements once it’s sunk in.