Happy Birthday!
Here’s a news item that probably slipped through the mesh, as it was quite low-key: Google is now 7 years old! This came as a bit of a shock to me in a way, and it probably will to you too: Nowadays, I would find it impossible to live and work as I do without Google. In fact, this one corporation has a pretty good monpoly on my life. I use Google on my mobile to find anything from street directions to the meaning of the word “vehement”. I get my email from them, and of course I use it to browse the Internet. It’s hard for me to imagine, then, that seven years ago, people managed to survive without Google. 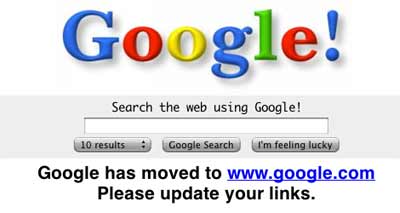 I found a screenshot of what Google used to look like on the Internet archive, and although it does obviously look a little old-school, it’s still much the same interface-wise as it is today:

That was at a time when Google was still hosted on the Stanford University servers and had a staff of two. All I can say is that they’ve come a long way.

For me, this is a reminder that I am a part of the generation that has grown up at the same time as consumer technology: The children of tomorrow will grow up taking things like Google and the Internet for granted, and will never be able to experience a world without technology, and so will never fully appreciate it. I personally don’t think that technology will continue to evolve as fast as it has done so far, simply because I don’t think that there is anywhere for it to go. Off the top of my head, there isn’t anything that I can think of that I would really like, but can’t have, because it’s simply not technically possible. Still, time will tell, and I suppose in 70 years time I will be the one saying to a group of grandchildren while they mock me: “In my day, we had to look through books to find what we wanted you know!”

There’s a fascinating history of Google available on their corporate history page here. 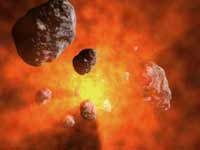 It’s in Space, it’s got to be cool. Oh, actually, no nukes, so forget it
In a development reminiscent of the movie Deep Impact”, scientists have revealed a few ideas about what to do in case of an imminent asteroid impact. Their ideas just aren’t as cool as those in the movie though in my opinion: I mean, come on, you need a few nukes in there to make it look cool! Ah well, never mind, I just hope that in case of there being any danger of an impact, the scientists responsible will find some way of saving us. There have, afterall, been a fair few objects that have come close in history, and the dinosaurs can surely (or rather not) testify that sometimes, these things do actually hit Earth.

“Batman’s Blackberry”, but I still want one!
The story on the new Blackberry 8700, due to be released “in the neighborhood of December of this year or very early 2006,” hit this week. Having previously reviewed a Blackberry 7100v, I am very keen to have a play with the new phone. Apparently, it sports a 312mhz processor, which will hopefully make the browser a viable option for browsing anything but the most minimal of Web pages. We shall see, now all I have to do is get my hands on one ;-)

Admittedly, the styling does remind one of a phone tailor-made for Batman, but then it’s kinda cool anyway, and the screen looks like it’s going to be great! The screens on the 7100 and the 7200 were already some of the best seen on mobile phones, and so I have high hopes for the 8700. I bet Robin’s already got one, lucky sod! The rest of us will have to wait until December.