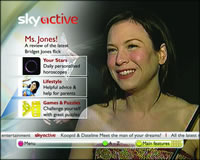 The Times have covered Richard Freudenstein, COO of BSkyB, speech at the RTS Cambridge Convention

Sky will be delivering video to mobile phones, as we’d predicted when we reported that NDS had signed a deal with Frontier Silicon.

We understand that it will include Sky Movies, Sky News and Sky Sports (which is bound to get some excited).

They also plan to let their Sky+ subscribers programme their PVR using their mobile phones.

The other biggy in Freudenstein talk was him confirming that that Sky will be offering VOD (Video On Demand) which will run over Ethernet – ie delivered over broadband. They’re not confirming dates.

Sky has been muttering about this behind closed doors to those who would listen for at least 18 months, but it’s the first time they’ve said it publicly.

Expected Sky and BT to strengthen their current cuddling relation, to a full on snog, as BT’s 21CN comes more into reality. this will provide additional bandwidth and an Ethernet port into every home in the UK, as they’re trailing in Cardiff, Wales.

The poor things at The Times have got a little bit confused between memory and storage of Sky’s PVR, Sky+, ‘newest Sky+ boxes have extra memory that is currently not used.’ Ah, isn’t it sweet. You’d have thought that two companies within the News International group would be able to understand each other business.