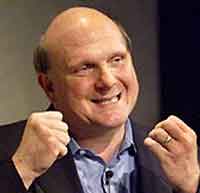 It’s funny, laugh!
Couldn’t believe this one when I read it. Well, almost couldn’t believe it. Following on from the earlier story, Steve Ballmer is now apparently denying ever having thrown a chair across a room in anger and claiming he would “f—ing bury” the executive, Mark Lukovsky, who told Ballmer he was leaving Microsoft for greener pastures offered to him by Google.

Ballmer told the Telegraph: “I’ve never thrown a chair in my life,” which The Register says might raise the idea that he got someone else to do it for him. I probably would if I was as rich as he is!

Lastly, am I the only one who thinks that Steve Ballmer has a certain resemblance with Shrek? 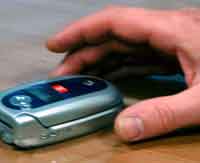 Ew… That’s not nice!
According to The Register, a Romanian woman has tried to evade being caught thieving a mobile phone by sticking it where, well, the sun doesn’t shine.

Police when they caught her were puzzled by their inability to find the phone, but quickly solved this problem by ringing the phone, which, well, pin-pointed the phone’s position and the woman was escorted to the police station to have the device removed. The phone was then given back to its rightful owner after being sprayed down with detergent. 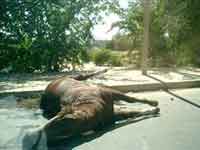 Flogging a dead horse… Literally
Apparently, there was someone selling a dead horse on eBay not so long ago. I do have my suspicions about the sincerety of the auction, seeing as the only details present in the auction were:

Please email me with any questions.

Sadly, the original listing has now been removed from the site

These ridiculous auctions remind me of a lovely list of auctionable tid-bits including: