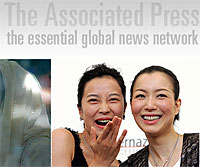 Yo! Yo! Yo! Word! The Associated Press are getting hip and launching a news service for da yoot. Wicked, innit?!

On Monday, the near-ancient (well, 157 years old) newswire is launching its “younger audience service,” offering articles and “experiences” in multimedia formats, with audio, video, blogs and audience-participation features aimed at capturing the easily-distracted attention spans of a younger audience.

The hope is that all these interactive baubles will help entice the 70 million 18-to-34-year-olds in the US into becoming the next generation of news consumers by drawing them to AP’s member sites.

Naturally, farms of flapping flipcharts and masses of mood boards were employed as creative types toiled over their double mochas to come up with a suitably street name for the service, eventually christening it “asap”.

Apparently, the deal is that you pronounce the name letter by letter to “evoke the wire service’s legendary speed”. So don’t go upsetting those delicate designers by calling it “A Sap”

AP are claiming that the service will be “provocative, smart, relevant and immediate”, delivering the latest in news, entertainment, lifestyles, money and gadgets, and sports on a daily basis.

So far, more than 100 newspapers have signed up for asap, with the option to use the content for their online editions, print editions or both.

According to Ruth Gersh, project development manager for asap, none of the papers would be charging readers for asap’s content.

Although no specific charges have been publicly released, pricing for the service will depend on the circulation of the newspaper buying it.

Ted Anthony, the comparatively ancient 37-year-old editor of asap, said that original material will be included in the service, penned by a new staff of twenty mainly New York based journalists.

Giving an example of the sort of content that might be used, Anthony said that an AP reporter in Kazakhstan might file a news article for the wire but recount his journey in an audio clip for asap.

“We want to bring people closer to the news and closer to their world, and we do that by recognising that there are real people who are gathering the news; they aren’t simply automatic fact-gatherers,” commented Mr Anthony.

Learning from focus groups and prototypes that their target audience demands a sophisticated view of the world with a need to be engaged, the answer is, apparently, to use the word “you” more in their articles.

“We’re doing things the AP has never done, and we’re using the incredible global scope of this organisation to bring the most interesting stories in the world to people in entirely new ways,” said Anthony, spectacularly failing to fit in a single engaging “you” in his comment.