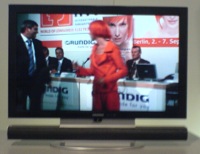 As with all companies at IFA, Grundig have shown a ton of new products, try to persuade the assembled throngs that they are approaching Digital Lifestyles by understanding the consumer.

It was all very much of a muchness, until they started talking about 3D TV … everyone in the room lent forward a little. Would this be for real or not. We learnt that it wasn’t the 3D that needed red and green glasses that give you a headache, but was to be viewed with the naked eye.

Working with X3D technologies, 3D Image Processing and Cobalt Entertainment (who make the camera), the result are shown on a standard LCD TV Tharus 30 with a special filter, provided by X3D Technologies, fitted to the front. The clever stuff is performed by 3D Image Processing’s (3D-IP) Black Betty box, which generates 8 different views of the 2 pictures recorded by the camera, jiggles them around and displays them in 3D in real time.

Back to the demo … Miss IFA (the shows red-haired icon) is called forward to demonstrate.

The special 3D camera was unveiled, as were the monitors covered with black-out cloths. Argh … the displays showed fractured moving images striped vertically down the screens. Tech wiz Steve was called forward to carry out emergency turning to the display unit, while the demonstrator started to sweat, explaining that it had worked for the 20 times they had tried it this morning. The black cloths were placed back on the screen to hide the embarrassment.

A couple of button presses later and Steve announced it was ready.

As the monitors were revealed, the 3D TV was seen and the room was impressed. The ideal viewing distance of 4m was soon compromised as people eagerly clambered over each other to get a view.

It’s impressive, with the subject that is nearest to the camera actually appearing forward of the rest of the image in shot.

Grundig plan to release the first content on disc – as soon as the cameras have been used to shoot anything. The rumors are George Lucas is already preparing some of Star Wars for 3D broadcast.

Oh and if you want to impress your geeky mates, you can call the screen a ‘auto-stereoscopic multi user display’, and that’s official.