Barging its elbows between online mapping giants like AOL’s Mapquest.com, Yahoo, Google and Microsoft’s MSN.com, Amazon is hoping that its novel street level photos will give them a critical edge amongst consumers.

The company has amassed an index of 35 million photographs spanning 22 neighbourhoods of US cities, letting users view photographs of entire city blocks alongside a traditional map showing a grid of streets.

Amazon first introduced street-level photographs of specific addresses as part of its Yellow Pages listings, but the company believes that consumers will find the A9 service a more helpful view than Google mappings satellite views.

Obtaining driving instructions with the service is easy enough, with users clicking on starting and destination points on the map rather than having to type in addresses. Clicking on a point on the map will get the corresponding address to pop up.

There’s some clever business tie-ins built into the service, with driving instructions providing photos of all the businesses along the recommended route (if the images are stored in the search engine’s index).

Amazon have been photographing city streets like Cartier Bresson on amphetamines, adding over 15 million more pictures since the January debut of the Yellow Pages service. 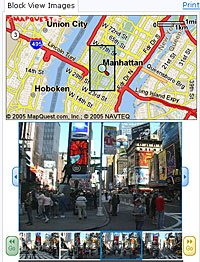 Not surprisingly, the horizon-challenged photographs ably illustrate that there’s none of Bresson’s magic in evidence, with pictures being automatically snapped by trucks equipped with digital cameras and GPS, receivers.

Despite being backed by an industry underweight, the two year old A9 search engine remains a Johnny-come-lately in the lucrative search engine industry, processing just 4.9 million search requests in June.

This gives it a lowly ranking of 27th amongst Internet search engines – a figure which equates to a measly US market share of 0.1 percent.