After a period of speculation, a press release on UK cable company NTL’s Web site makes it official that they intend to move their customers to broadband connection “up to 10Mb as standard.”

Don’t get too excited yet. Clearly that could mean anything, even 2,400 baud fits into that category.

NTL tell us that they will be first upgrading their current 3Mb customers to the 10Mb service, while expanding these customer download restirctions form 30Gb/month to 75Gb.

We at Digital-Lifestyles hate a limit on traffic – we see it as another way to extract cash from punters when they start to have their TV/video content delivered via their broadband – an extra reason for a cable TV company to restrict you.

Well, when this all going to happen? It’s pretty unclear, but according to NTL, ‘by the end of 2006, the roll out of this new product portfolio will be complete,’ which gives them a lot of leeway doesn’t it? 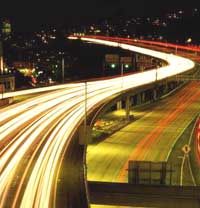 We think it may be some time before this actually gets to the customers, as NTL are also talking of introducing an interim service, ‘The Turbo Button,’ which will burst a connection to higher speeds, when customers are downloading bandwidth heavy content like video.

NTL and their broadband service have for a very long time been damned by many of their subscribers, past and present. They were recently voted the very worst broadband provider in the UK in a poll of member by the consumers organisation, Which?

Such dreadful service lead one particular subscriber, Bryan Stevens, to take action online four years ago, forming ntl:hell, a news and discussion board that was solely focused on how bad NTL’s service was. Its membership expanded at a frightening rate … up to the point were NTL offered Mr Stevens a job running the board for ‘the good of NTL subscribers’. A look at the discussion board today give a clear indication of how effective embarassing your harshest critics works.

Many of you will already know that the person who was managing director and chief operation officer at NTL during the time ntl:hell was born – Stephen Carter. He now runs the UK super regulator OfCom.