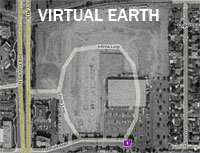 Microsoft has launched the first public beta of its Virtual Earth, an online mapping application overlaying satellite images with local searches and maps.

Virtual Earth has a trick up its sleeve through its ability to transform Wi-Fi enabled PCs into “location-determining devices” without the need for any separate hardware, as we reported earlier.

The system works by noting the latitude and longitude of available Wi-Fi access points and then triangulating a user’s location after consulting Microsoft’s huge database of router MAC addresses.

A user’s current location is then highlighted onscreen with subsequent search results tailored around that location. 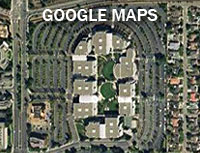 Virtual Earth will also have the capability to visually point out locations for ATMs, restaurants, and petrol stations – something that the rival Google Maps service has been able to do since incorporating satellite imagery in April this year.

“MSN Virtual Earth provides a deeply immersive search experience that lets people see what it’s like to be in a location and easily explore what they can do there,” purred Stephen Lawle, general manager of the Microsoft Mappoint business unit.

The service which currently shows US-based satellite images only and users must download the Microsoft Location Finder client application access the location-finding services.

Microsoft plans to knock out updated versions of Virtual Earth every four months, with the next beta release set to incorporate bird’s-eye imagery licensed from Pictometry International which will add cities, landmarks and points of interest to the product.

Microsoft also plans to integrate traffic data and weather data to the service in the coming months.

Mac users, however, will have to wait until autumn for a version that runs on their machines.

MSN Virtual Earth project manager Mark Law has insisted that MSN Virtual Earth is not a purely consumer-based site only, adding that Microsoft will be making the application-programming interface available to developers.

Microsoft has said that future versions of Virtual Earth will allow users to create their own interactive maps, and add their own reviews of restaurants and other places.

Wags on the Internet are claiming that Microsoft has virtually wiped Apple off the face of the Web, noting that Apple’s Silicon Valley headquarters – which can be seen in their full glory on Google Maps – appears as nothing more than a deserted parking lot in Virtual Earth.

Microsoft insisted that because the service was still in its testing phase, it’s just a coincidence that they used older, black-and-white photographs to display the barren wasteland around Apple’s headquarters in Cupertino, California in 1991.