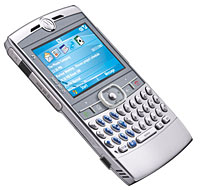 Billed as the “thinnest, lightest, coolest QWERTY on the Planet”, the new Q phone from Motorola has set a few hearts pounding in Chez Digi-Lifestyles.

Claimed to be fifty percent thinner than its top competitors, the lightweight Q is based on Motorola’s successful RAZR-thin design and offers a full QWERTY keyboard, electro-luminescent keys, one-handed navigation thumbwheel and an internal antenna.

The device sports a large high-resolution display (320 x 240 pixels, 65K TFT) with a l.3 mega pixel still/video camera (with photo lighting) onboard, and the whole caboodle is powered by the new Windows Mobile 5.0 operating system. 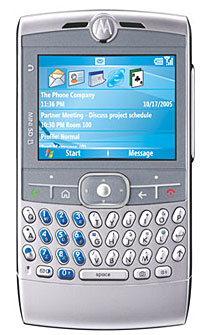 There’s a Mini-SD slot provided for extra storage and connectivity is taken care of via Bluetooth, IrDA and mini-USB.

High flying execs too busy to even touch their Moto will appreciate the voice-activated dialling, hands-free multi-tasking, speakerphone and built-in support for Microsoft Exchange 2003.

“Probably never. At least until now.” 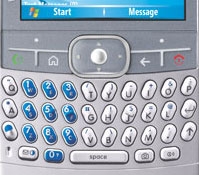 “With the Moto Q, we’ve combined the best voice, data and design technology in one ultra-thin, intelligent, hard-working, and incredibly must-have device. Today’s office space has the potential to be any place you want it to be with Q.”

Err, thanks for that Ron. But we won’t be calling a QWERTY device “wickedly cool” until it comes with built in Wi-Fi. 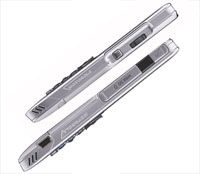 Although it’s clearly trying to get a piece of the lucrative Blackberry market, we reckon the collars will be getting sweatiest around the Palm Treo boardroom.

And that’s not a very pleasant thought.