The rurmour mill continues to hum with speculation that Apple are set to introduce a video playing iPod-like device in the near future.

The Business 2.0 blog reports that Apple is trying to strike similar deals with Disney, ABC News and ESPN.

As ever, Apple are keeping Mum on any proposed new hardware, although Steve Jobs has already commented about how the current iPod screen isn’t ideal for watching videos. 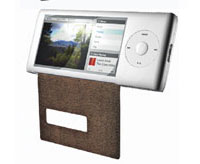 This has led to speculation that the company will be revising the iPod to create something like the ‘vPod’, a concept device created by design firm Pentagram which was published in Business 2.0 Magazine in March.

The magazine’s mocked-up machine looked like a version of the classic white iPod, stretched out to accommodate a wide-format screen.

An oversized iPod form would be unlikely to find favour with Jobs as he has already dismissed larger devices such as the Creative Portable Media Center for being too bulky and cumbersome to be a truly convenient portable player.

In fact Jobs has adamantly said ‘no” to video on several occasions, commenting in October that video on the iPod is “the wrong direction to go … there’s no content” and competitors providing video are “digging in the wrong place.”

Trouble is, Jobs is well known for trying to confuse competitors with double speak and bluff – he made much the same negative claims about Flash-based music players before releasing the Shuffle.

For many, the smart money is on Apple leaving the iPod as it is and introducing a completely different video player that will aim to grab the public’s imagination in the same manner as the iPod captured the music download market by the MP3s.

The big problem with trying to create a multimedia device is that people demand quite different things for mobile audio and video.

Music listeners want a small device that can fit into their sweaty jogging pants, while video buffs want a big wide screen for their moves that won’t be obscured by a few flakes of popcorn.

How Apple can resolve this quandary and come up with a competition-crushing compromise is anyone’s guess, but B2.0 editor Paul Sloan feels confident that they’ll manage it:

“If the past is any measure of what’s to come, Jobs will enter the arena late (as he did with the iPod) only to leapfrog over the competition with some entirely different device. And that could leave everyone from Microsoft’s Bill Gates to Sony’s Howard Stringer once again racing to copy their far smaller rival.”