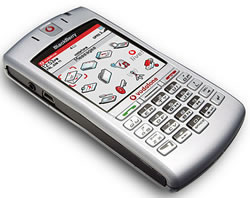 I’m writing this review over a few days, using the 7100v instead of my usual phone. Today, I switched the 7100v on in the morning, received and replied to a few emails and set off for the day.

On the bus, I read the PDA edition of the BBC Web site using the built-in Web browser (more fully covered later). After lunch, I pulled it out of my pocket to check over the mail that had arrived. Imagine my horror when I spotted two huge, yellow lines covering the screen. On scrolling, these lines became more pronounced and seemed to spawn more of themselves, until they covered the whole screen. My first thought was that pixels in the screen were damaged, possibly as a result of me sitting on it, as it had been in my back pocket shortly during my lunch break. I tried switching the handset off and back on again, but the lines didn’t disappear. I was already thinking “Oh no, I’ve broken it” when I had the presence of mind to take the battery out. Miraculously, this solved the problem with the screen, suggesting this problem was possibly a software related one, as opposed to a hardware one. I never did track down what caused it but having bugs like this in released software is not a way to reassure customers that a product is beyond the early-adopter stage and while not a major problem. Occurrences like this one do make you slightly wary of purchasing such a device with your own hard-earned money.

Battery life
My initial experience of the battery life was very poor, with the battery dropping from full to empty within about 8 hours. After a few charging cycles, however, this improved dramatically, and the battery now lasts a good two days under relatively heavy use. This discovery came as a very pleasant surprise to me, as with my usage pattern the only other handset that I had managed to keep alive on a single charge for over a day was an ancient Nokia 6210. The one thing that is bad about the battery on this handset, however, is the time it takes to charge up: It takes around 6 hours (!), an unheard of amount of time in my experience of other handsets. This makes my customary “plug it in for an hour before I go out” habit worthless, as the battery doesn’t even come close to full in that time. 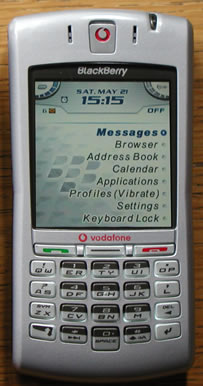 Screen
The screen on the 7100 is very impressive in its clarity and brightness – the contrast isn’t bad either. Images viewed on it look very solid, almost as if they are actually colour-printed backlit acetate as opposed to being displayed on an LCD.

The main downfall of the screen is when it is placed in sun-light: The screen is about 5mm below the plastic covering over the screen, and this covering isn’t of particularly high-grade plastic, leading to a badly obscured screen in bright conditions. The cover is also quite reflective, so often you can’t see anything on the screen at all. Indoors however, the screen looks great and everyone I’ve asked about it has been very impressed by it.

Web browsing/access
I have grown accustomed to doing a lot of my Web surfing on the move, or at least not while sitting in front of my computer, as I find it more comfortable that way. To me, it means that the Internet can truly take over from books and newspapers, because you can browse the Net on the sofa, while eating dinner, or anywhere else for that matter and aren’t tied to sitting in a rigid office chair staring at a screen.

As a result of this, the Web browser on the Blackberry was of particular interest to me. RIM seem to have paid particular attention to complying with standards in the design of the Blackberry’s software and this shows in the browser: It supports style sheets and javascript, both features very uncommon for a mobile device. Style sheet support means that, in theory, a Web designer can write one page that will look different when viewed with a small-screen device than when viewed with a full-size computer. This means that it is possible to, for instance, make a small-screen device employ a larger font when rendering a Web page than a computer, to take account of the small screen size. Sadly, sometimes sticking to standards isn’t enough, and this is the case with the Blackberry. 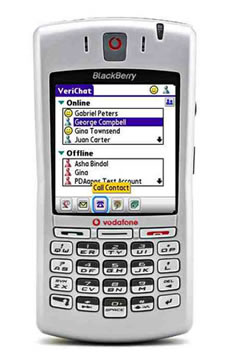 When Web pages are rendered, there are a lot of unnecessary images which would be represented instead by text. This text is usually shown in the ALT tags of the HTML from which the pages are rendered. On a lot of sites, there are a lot of navigation images, which are not good for render time on a low-powered device like the Blackberry: every time a page is opened containing images, these images are downloaded (this takes a long time with the Internet connection on a 7100v being at dial-up speeds). When downloaded these images are resized individually so as to fit on its screen.

Unless the sites that you wish to visit using your Blackberry are graphically very light with little images on them, you may despair of the slow speeds. Other handhelds get around the image problem by simply not displaying all images, only the ones that they think are vital to the site. While this can lead to problems like the right images not being loaded, these problems are uncommon, and the associated speed increase more than makes up for this.

There is a hotkey in between the answer and hang up buttons on the keypad of the Blackberry which opens the Web browser. This may suit some people more than others. Personally, I found it a bit annoying, and it would have been far better to use it as a selection softkey or at least make it configurable.

Part one of this review, looking at how to enter and retrieve information, was published yesterday. Part three will follow.

One thought on “Vodafone 7100v Blackberry Review – In Everyday use”