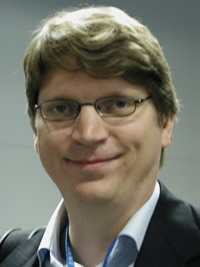 Here at VON Europe in Stockholm, Sweden, Niklas Zennstrom, CEO of Skype, has just announced the official launch of the Skype affiliate scheme. The scheme has been running as a trial for a few weeks, gaining 1,800 members.

Working with affiliate site Commission Junction, they plan to reward Skype users who promote their pay for services. In return, affiliates will get a varying percentage of the value of the purchase, depending on the service and the number of people that they sign up each month.

They do this by simply by placing a link on their site or by sending the links through via an email.

Speaking to Niklas yesterday (audio interview with Niklas Zennstrom 20mins, 19Mb), he told Digital-Lifestyles, “We’re creating a structure where Skype users who promote us, can start to make a buck out of it,” while he acknowledged that they also benefit.

There will also be “super affiliates” that will have their own Skype account manager – a first for them. The first two announced are Luna Storm in Sweden and SuperAva in Italy. Luna Storm is a online phenomenon in Sweden, having over 2m members, which in a country of 9m in total is pretty impressive.

Looking at the percentages that are offered, they give guidance as to which Skype services are the most profitable, and it’s no surprise to see that they’re SkypeIn and voicemail. SkypeOut, which connects Skype VoIP user to the public phone network, enabling them to call land-lines. When connecting to the public phone network, Skype has to pay operators for the time the call is connected.

Not surprisingly if people sign up for the normal free Skype service, the affiliate receives no financial reward.

Skype are in a position where they have grown very fast, recently hitting 3m concurrent users, but they are still vulnerable to an alternative service coming along and usupring them.

The larger their installed base of users, the larger the barrier is to competitors. They know that the more people in a Skype users social/family circle that download and sign up for Skype, the more difficult it becomes for a competitor to unseat them. The process of talking you mum, granny and sister-in-law isn’t something you want to repeat.