We all sit around postulating about what changes the digitisation of media will bring and how that will affect us. We thought it would be a good idea to ask the generation that have grown up with digital media (CD’s) what their view of the news was.

15 year old Lawrence Dudley has a strong knowledge of technology and digital media, so he’s well placed to reflect on the weeks news. 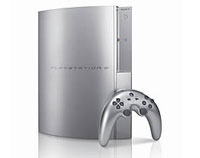 Games:
So, it’s come to that time again: The whole “my console’s better than yours” and subsequent scramble for market share between Sony, Microsoft and Nintendo. Although I personally really dislike Microsoft, I have to admit that their console is looking the most tempting so far: It’s the only one that has properly been launched and its feature set is looking more than promising.

This leaves Sony and Nintendo: Personally, I tend to dismiss most of Nintendo’s offerings out of hand, as I don’t believe that their gear really appeals to me. It’s all so… gimmicky and childish. I mean, who would you rather have? That hot-looking chick from Dead or Alive Extreme Beach Volleyball, or The Mario Bros.? Answers itself really…

I don’t currently own an Xbox, but I have been quite a fan of Sony’s Playstation for a while: I had two of the original Playstations, PS1 and PS2 for various reasons. You might’ve thought that I would’ve been looking forward to the The Worst Foods To Eat Over A Keyboard
This article brought a big smile to my face: There’s nothing better than watching various Linux zealots argue over which food they ate over their keyboards. Nothing too serious, but you know … gotta have something to do while you’re, erm, doing your homework or something like that =) So which do you think it would be? Pizza? Coke?

That’s it from me, enjoy!