Video Networks, providers of the HomeChoice entertainment and communications service, has announced the addition of a brand new R.E.M. video-on-demand (VoD) channel to its platform.

HomeChoice customers keen to keep on losing their religion will gain exclusive access to the channel – which has been entirely designed and built in-house – from 31st March 2005.

Earlier this year also saw the re-release of nine of R.E.M.’s most successful albums including Green, Out of Time and Automatic for the People. The launch of the R.E.M. channel ties in with the band’s UK tour.

The V:MX R.E.M. channel is being trumpeted as the first artist specific video-on-demand package in the world and will sit within HomeChoice’s suite of V:MX music channels, which feature a library of over 3,000 music videos.

The R.E.M. channel will offer a R.E.M. videography (a what?!), featuring the nine re-released R.E.M. albums.

The functionality of the HomeChoice service will let customers create their own R.E.M. play list from the music videos on the channel and optionally purchase downloadable tracks by SMS.

While useful, this isn’t quite as slick as it sounds: if a viewer hears a track they want to buy, they have to click on the onscreen information button which will provide a number to text. A code is then sent back to them which they can enter when they log onto the Internet to download the music track. When we spoke to HomeChoice, they told us they were working on a more integrated way of getting pay-for content to their customers.

Naturally, there’s the usual ring tone guff provided for those who like to display their ‘individuality’ with irritating phone noises, with the channel offering 10 R.E.M. true tones of their most popular tracks, purchasable via SMS for £3 (US$5.60 /€4.40) each.

The R.E.M. channel will also include four competitions throughout the life of the channel, with prizes including an MP3 player pre-loaded with R.E.M. tracks, a pair of VIP tickets to R.E.M.’s concert in Hyde Park in July plus several R.E.M. goody bags.

The deal is what ghastly corporate types would call a “synergetic win win situation”, with Video Networks telling us that “no money has changed hands as both parties have brought certain elements to the channel and will then be sharing the revenue from the downloads and ring tones.” This would make sense, Warners/R.E.M. are providing a lot of content, and HomeChoice/Video Networks are providing a lot of design, programming and, of course, bandwidth. Video Networks have 34 people working in their in-house design studio and within the TV product team. 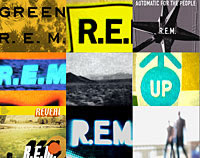 Roger Lynch, Chairman and Chief Executive, Video Networks Ltd said: “The addition of this on-demand channel is not only a true coup for R.E.M. fans but also ensures Video Networks continues to offer the most innovative music content on TV in the world today.”

The R.E.M. music channel will be automatically available to all shiny, happy customers who currently subscribe to the HomeChoice music package.

The negotiations for the deal with Warner Music have been underway since the beginning of 2005, brokered by a Video Networks BizDev person, who joined them from the music business. The service launches on 31st March 2005 and is available for a total of 16 weeks.