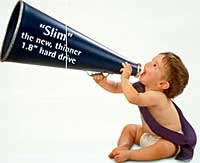 Hitachi has announced that it will ramp up its output of consumer hard drives this year as it strives to take advantage of the soaring storage demands of MP3, PVR and mobile phone markets.

As part of its strategy for the consumer market in 2005, Hitachi will open five Hitachi Design Studios worldwide, each one specialising in helping partners to integrate hard drives into consumer electronic devices.

The new centres – called the Hitachi Design Studios – will be scattered all over the globe (Fujisawa, Japan; Havant, UK; Rochester, Minnesota; Shenzhen, China and Taipei, Taiwan) and will open for business in April.

Hitachi intends to thrash their workers to an inch of their lives and get them to treble their output of 1.8-inch drives (used in Dell DJ music players), and double the production of 1-inch drives, as used in Apple’s iPod mini. 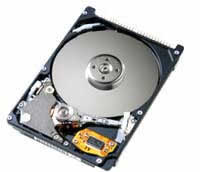 A smaller version of the current 1-inch drive, code-named Mikey, comes out later this year, with capacious 2.5-inch drives – holding up to 500GB – being targeted at makers of DVRs and home servers. 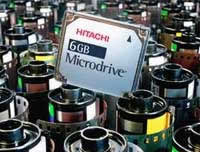