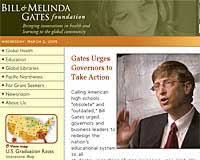 Bill Gates, 48 was dead chuffed to receive the award, saying it was “a great honour” to be recognised for his business skills and for his work on poverty reduction.

The entrepreneur – the richest man in the world worth an estimated £28bn. – was handed an insignia to make him a Knight Commander of the Order of the British Empire, an honour that dates back to 1917 (although monarchs have been creating knights for centuries).

The ceremony took place amongst all the pomp and grandeur of the formal state-rooms at the palace, and involved Gates kneeling in front of the Queen, and getting a gentle tap on the shoulder with a sword.

Gates was granted a private audience with the Queen after the ceremony, and reported that they spoke about using computers (perhaps Her Majesty was having trouble with her Windows installation?)

As an American citizen, Gates can’t use the title “Sir” but he is entitled to put the letters KBE after his name. 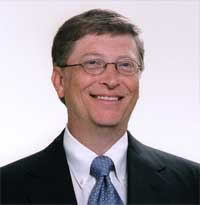 Gates and his wife Melinda are well known for their charitable work, investing millions in research for an Aids vaccine and a scholarship scheme to enable the brightest students to go to Cambridge University.

The Bill and Melinda Gates Foundation is currently working on a global health programme in the developing world.

Not everyone loves old Billy though, and Microsoft have been convicted of anti-competitive behaviour in the USA and are currently being investigated in Europe.