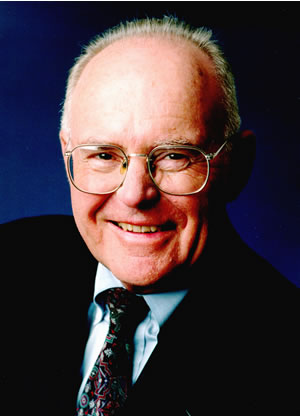 For over forty years Moore’s Law has stood to be correct. It’s now being questioned as to whether it will continue.

Named after co-founder of Intel, Gordon Moore (pictured), Moore’s Law stated that the number of transistors that can be placed on an integrated circuit doubles every two years.

Len Jelinek, director and chief analyst, semiconductor manufacturing, for research company iSuppli, has raised the flag that given the economics of the chip business, it could well come to an end, in around 2014.

Jelinek thinks that “The usable limit for semiconductor process technology will be reached when chip process geometries shrink to be smaller than 20 nanometers (nm), to 18nm nodes.” It’s currently at 65nm.

When reaching the 18-20 nm level, Jelinek theory is that “the industry will start getting to the point where semiconductor manufacturing tools are too expensive to depreciate with volume production, i.e., their costs will be so high, that the value of their lifetime productivity can never justify it.”

Initially it was important to Intel to push the capabilities and complexities of their chips, in an effort to keep a gap between them and the competition. Jelinek thinks this relentless move by the chip business is slowing down, saying “Now the question is how to make money by sustaining a specific node.”

3 thoughts on “The Future Of Moore’s Law Questioned”