Currently in deep beta with only a few invited users in Seattle allowed to play along is Microsoft’s Vine application, a Twitter-like app aimed at letting people communicate in disaster situations.

The location-aware social networking app offers a robust means of local communication and installs on your desktop (Windows only).

The app scoops up local news from up to 20,000 sources (!) and displays it on a funky map, with the option to post up alerts (short messages) and reports (longer posts) from your desktop or via e-mail or SMS, with built-in Facebook integration and Twitter integration said to be in the works.

Although we’re digging the idea of a social network for emergencies we’re having trouble getting our heads around who’ll actually be using the thing. 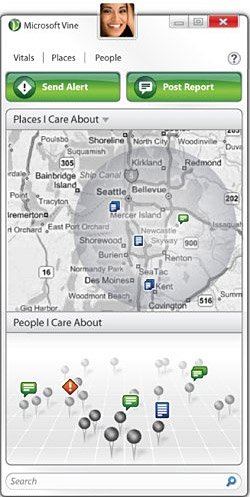 Microsoft says that the system could also be used by football teams or schools to tell people about closures or schedule changes, but unless it manages to acquire a critical mass of users, we’re having trouble seeing how it can catch on.

We can sort of see the program’s appeal though. Microsoft’s Vine offers a more structured way to communicate without being burdened by Twitter’s 140-character message restrictions, and considering Twitter’s notorious flakiness, it’s sure to be a more stable and secure system – which is exactly what you’d want in an emergency.

However, the trouble is that most folks are already quite happy to get news and alerts from Facebook and Twitter and with both services slowly improving, Microsoft could be forever lagging behind, regardless of how good their service becomes.