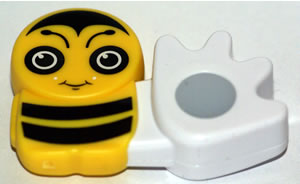 What’s a Poken you may ask? On the other hand you may say “Who cares?”

For those interested, a Poken is a little device – a sort of character which is made up of a hand (which has a USB connector) which slots into the character part of the unit. The hand is a sort of RFID device (it actually uses magnetic induction) and when touched on to another Poken, they swap Poken IDs and it glows green to show that it’s working.

When the ‘hand’ is then plugged into a PC (or Mac) it appears as a disk – labelled POKEN oddly enough. There’s some files in the main directory: –

autorun.inf – which will automatically run on a PC starting the browser.

help.txt – just a text file telling you what to do.

Start_Poken.html – which send the browser to the Poken site.

Clicking on the Start_Poken.html (or automagically in Windows) you’re sent to the Poken site with the Poken ID attached to the URL. You can either sign-up or log in.

Assuming you’ve already signed-up (the sign-up process is similar to any other social networking site), the Poken IDs you’ve collected will be uploaded to the site and you can see who they are (assuming they have signed-up and haven’t “ghosted” themselves i.e. made themselves invisible). It’s also possible to export their details as vCards so they can be used in Outlook or other PIM.

You can add various social networks to your profile (which requires login details for those sites).

A great concept
The idea is great, it’s “almost” like having an electronic business card, touch Pokens and you automatically get their information, no business card to lose.

Unfortunately the system is aimed at the youth market and they won’t pay. Business users might pay, but they don’t want silly characters.

The technology in each Poken costs around $10 to manufacture, that will decrease in volume, but they need to sell a huge number before that happens.

Will it succeed?
It’s a chicken and egg situation – until there’s a huge market penetration, Pokens are useless and they can’t get massive penetration. Youth aren’t going to pay 10 quid for something no one else has yet, but get enough traction and they could become trendy enough that everyone else wants one too. Perhaps the marketeers need to stand outside school gates handing them out like the drug pushers do.

They really need to integrate Pokens into mobile phones, but then they have Bluetooth and that could be used just as well with a small software application that does the same thing.

Poken (a Swiss company) say that take-up is growing (it’s big in Holland) but it needs HUGE take-up to be successful in the UK and that’s unlikely to happen any day soon.

The only people that seem to have Pokens are journos and the social media/networking junkies (who got one at Twestival).

Anyone else you mention Poken to just stares at you in an odd way.

They are available from Firebox in the UK for £12.95 (it’s possible to buy a 12 pack from Poken themselves so you can give them to your friends – but why would you? You know who they are already).

Poken site
Firebox (to get them in the UK)