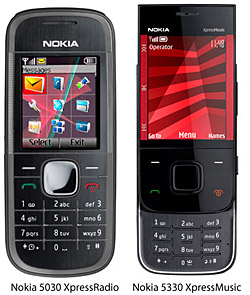 Nokia – currently reeling from a mighty slip in their market share – are hoping their fortunes will improve with the release of three shiny new music handsets, the 5030, 5330 XpressMusic and the 5730 XpressMusic.

The entry level Nokia 5030 can proudly big itself up as the first Nokia handset to feature an internal FM Radio antenna, which means you won’t have to faff about using the headphone cable as an antenna.

We’re rather big fans of phones with built in radios, so we’re impressed, even if the phone is a bit on the basic side for our saffisticated tastes.

The Nokia 5330 XPressMusic handset is a nattier looking slider jobbie, with dedicated XpressMusic touch keys on the side of the display with a claimed 26 hours of music playback plus social network integration to keep you exchanging inane drivel with your chums 24/7, around the clock. 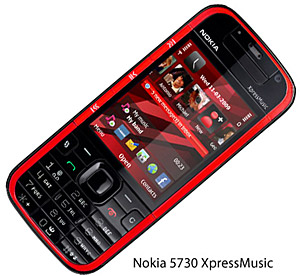 One thought on “Nokia Shimmy Out Three New Music Handsets”