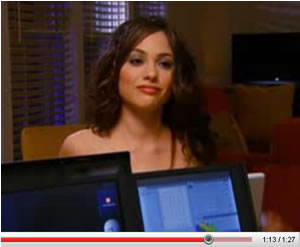 Lenovo’s W700ds, dual screen monster laptop, is an interesting beast, which is much more than can be said for the TV advert they’re using to promote it.

The ad, viewable below, is just so off the mark, it’s shocking.

The premise is well-worn and of weak humour when it was first used – Dorky bloke has a piece of technology that is so impressive that Attractive Girl can’t but throw herself at said Dork.

Lenovo manage to execute the idea in such a ham-fisted way that watching it can’t help but make you cringe.

Setup: Working late with the Attractive Girl, head back to his place, they both start boasting about their laptops, she decided to start taking her clothes off to, “make it more interesting.”

There is a point as you suffer through the ad where you think that they might bring it back with some sort of self-deprecation, but no, the closing lines are

Office buddy: “Man that thing is huge” (referring to the screen W700da screen)
Dork: “That’s what she said.”

You literally couldn’t come up with an ending worse than that.

Thanks Mike to the pointer