Part one of our Sony Vaio P Review was wowed at shiny colours; initial impressions on opening it and amazing screen resolution. Here’s the concluding section. 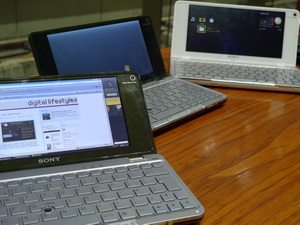 Keyboard impresses
If the display didn’t exactly knock us out, the keyboard was an unexpected treat. Although it’s clearly substantially smaller than a full laptop keyboard (Sony say that it’s 88 percent the size of their Sony Vaio TT keyboard, which is already smaller than a regular keyboard), it’s extremely well designed. We managed to get up a fair rate of knots on the thing with few errors and would feel comfortable typing out quite a few emails on it. 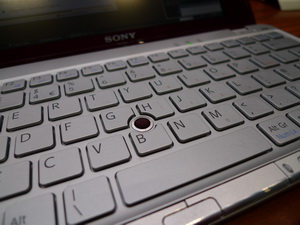 Stuck in the middle of the keyboard is a Thinkpad-style pointing stick (‘nipple’) which is very much a love-it/hate-it affair. Although we’ve been using them for years, it has to be said that the massive screen resolution combined with its tiny physical size meant that great care was needed to maintain accuracy. We certainly wouldn’t want to be trying to use it on a bumpy train ride. 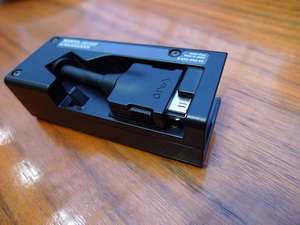 If you want to hook up the machine to an external monitor or Ethernet connection, Sony provide an external mini-dock, but this clunky slab of black plastic looks like it was knocked out by the cleaner while the designers were down the pub. It seems a strangely poor piece of design compared the marvellous lines of the netbook. 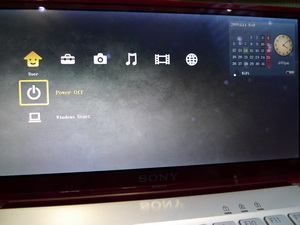 Xross Media Bar
Sony have made a big hoo-hah about their Xross Media Bar which allows quick access to features like music and video playback, instant messaging and accessing the web, without the need to rouse the slumbering Vista beast from its empire of sloth. It sounds like a great idea, but in practice we found it rather poorly thought out.

Although we could see the real benefit of being able to quickly whip out your laptop at, say, a railway station and look up a local taxi number, there’s a serious flaw in the Sony’s set up. When you’re booted up in the Xross Media Bar, there appears to be no way to scan and connect to any available free Wi-Fi networks to get online. Seeing as the 3G card won’t work in this mode either, users are forced to boot into Windows just to get online.

Another missed opportunity is the lack of an integrated fast email client, so even if you do get online you can only use web based mail, not a cut down version of Outlook etc., but the biggest omission of all to our eyes was the lack of PIM functionality.

Although there’s a full calendar displayed on the screen, it’s as useful as chocolate underpants if you want to check your diary or add an appointment. 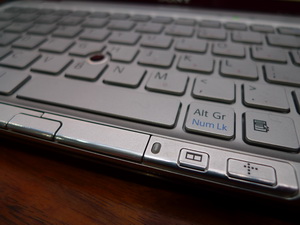 Perhaps we’re missing the whole point of this Xross bar thingy, but as seasoned travellers, we’d love to be able to get lightening quick access to such info when we’re on the move.

Sadly, the Xross wasn’t particularly fast in use either: it took over 13 seconds to boot up from cold and even longer to start playing a selected video clip, although to be fair the Sony rep said that we were dealing with a pre-production model, so perhaps things will be better in the final version.

Vista
Vista on a netbook is like ballroom dancing in flippers, with unnecessary ravines of glossy sludge and eye candy quicksand clobbering performance. Despite the latest Atom CPU and generous 2GB of RAM, you could almost hear the Vaio pleading for Windows 7 to come along quickly – or at the very least for Sony to offer the netbook in an XP version.

That said, the Vaio was fairly responsive when running Windows, although we still think that Vista is way over the top for the whole netbook concept. 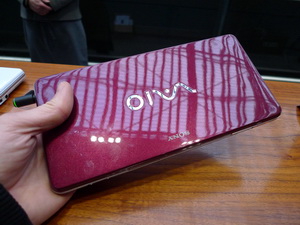 Conclusion
Like a lovestruck teenager finally getting to snog their pop idol, we arrived doe-eyed, softened up and ready to fall in love with the Vaio. We’d already lusted after its saucy lines and shiny surface, and the sensational spec sheet had caused us to bulk buy extra Kleenex to cope with the excess love.

However, after spending a fair bit of time close up and personal with the Vaio, we have to admit to being a little disappointed.

Although the massive screen resolution sounds like a recipe straight out of the Mighty Book Of WIN, in reality it’s just too small for practical use. Trying to navigate around the screen felt like playing darts after ten pints of Badger’s Scrotum Ale and the Xross functionality just seemed a bit half-arsed to be truly useful. 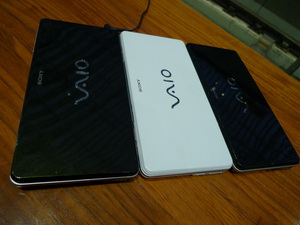 Although we have to qualify our comments with a reminder that we were using a pre-production model, we did feel a bit underwhelmed by our time with the Sony. There’s no denying that it’s a distinctive and beautiful piece of kit, but despite all its technological wizardry, there’s no way it could justify its price tag.

Oh, did we tell you the price? The Vaio P Series starts – yes starts – at an eye watering £850 and then stratospherically soars up to a leg-crossing £1,369, which makes us think that someone at Sony must have been on the crack pipe when they came up with that figure. 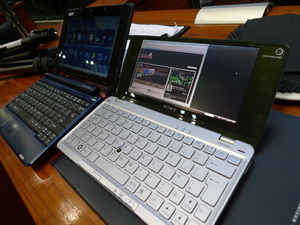 Sure, Sony is a premium brand and this is a very special looking laptop, but for that price you could buy four Acer Aspire One netbooks and, arguably, be the owner of a fleet of more productive devices (you can see the Aspire next to the Vaio in the accompanying photos).

Things may all change in the final production version of course (expected mid-Feb), but our first impression is of a glorious piece of immaculately designed, high tech engineering that ultimately is all about style over substance.

The funny thing is that even after saying all that, whenever we see the shiny slab of sexiness looking back at us, we still want one. Damn Sony and their cunning means for creating such illogical gadget lust!

Overall: 75%
Money no object Overall: 90%
One Line Review: Tastes delicious, but leaves a bitter after taste when the bill arrives. 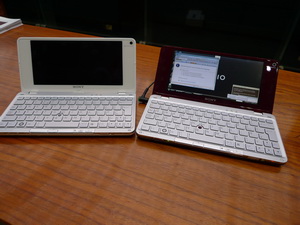 2 thoughts on “Sony Vaio P Review: Hands On With The Netbook/Lifestyle PC (Part 2/2)”