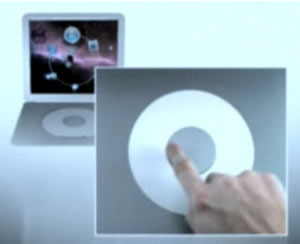 Apple has done it again with the announcement of their Mac Book Wheel.

The revolutionary design does away with the pesky keyboard that dominate laptops, replacing it with a single ‘wheel,’ as you’ve seen on their iPod products, further streamlining the look of the machine.

As is quoted in the video Steve Jobs says, “People who use keyboards stand in the way of human progress.”

Apple, as masters of product and interface design, have extended the functionality to include ‘predictive sentences,’ saving you the need to enter all characters of any lines of text that you might want to use to express yourself.

Contrary to their also-announced eight-hour battery, the Mac Book Wheel has a full nineteen minute battery, something that users of older laptops will already be familiar with as their batteries come to the end of their lives.

Those concerned with the fragility of the machine will be reassured that it is “virtually unbreakable unless dropped or hit.”

Not content to stop at the genius that is the Mac Book Wheel, it’s reported that Apple are also working on a machine that is 4 oz lighter, due to its lack of screen, hard driver … or wheel.

For further details of the machine and to see it in action, view the Onion News video below …