We really, really wanted to get along to the first HomeCamp event – which covered the now-realistic world of automating your home.

Due to a change of circumstances on our side, we couldn’t make it. Much to our relief IBM Master Inventor and Distinguished Engineer Dr Andy Stanford-Clark (who you may know from his house that Twitters) said he’d cover it for Digital-Lifestyles’ readers. Thanks Andy! 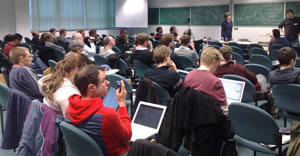 A couple of Saturdays ago I went to the first “HomeCamp,” at Imperial College in London.

HomeCamp was an “unconference” (a conference where the participants decide what form and content it should have, on the day) to look at areas of home energy monitoring and home automation.

There is a group of us who are all on social networking site Twitter, all using CurrentCost home energy monitors, and all keen on IBM’s MQTT messaging technology.

The conference was arranged largely via Twitter and a wiki, with “retweeting” of information to enable logistics to rapidly span social networks to reach a large number of people.

Places were limited to 50, and the event was fully subscribed, though about 5 didn’t show on the day. I gave an opening talk which described the background to the technology, and showed examples from my home automation and home power monitoring systems, along with other illustrations such as vehicle tracking, and my electronic mousetrap monitoring system(!). This talk was recorded and is available online. 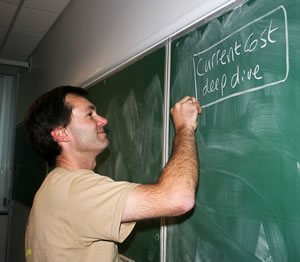 Un-conference in action
Attendees then suggested topics they’d like to hear about, and an on-the-fly agenda was rapidly generated. Each talk explored an area of energy monitoring (currentcost internals and demand-aware appliances), or home automation technology (Arduino doorbell and ambient displays), or social aspects of home power management. There was lively debate and a stream of insightful and discussion-provoking questions.

A constant stream of tweets on Twitter, and a ustream video stream enabled many more people, who weren’t able to be at HomeCamp in person, to benefit from the sessions. The video segments were captured for later playback on ustream.

Managing electricity demand
I was particularly interested in a discussion around frequency management of the power grid – the way small deviations from the standard 50 Hertz can be used to infer a surplus or deficit of power on the grid.

A new generation of “demand-sensitive” home appliances, for example a fridge, could manage their on/off cycles to be sympathetic to the state of the grid, and thus reduce load by turning off when demand is high, and helping to absorb surplus power by turning on when demand is low. If everyone used these smart appliances, power generation would be much more efficient and save millions of tonnes of carbon every year.

Wide expertise there
The diverse backgrounds of the attendees meant that there was expertise on many areas of technology in the room, which made it very easy to get great answers to the many questions that were asked. Discussions around what the next generation of home energy monitoring systems will look like were fascinating, describing a pie chart of the total power usage, with slices representing different appliances, such as the TV, fridge, dryer, etc.

One statistic which you might find surprising, is that for appliances which use power when not being used, like televisions on standby, power bricks left on, stereos, set-top boxes, etc, every Watt of power that’s on all the time costs you a pound a year, so “£1 per Watt per year”. 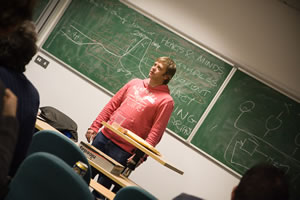 If you have 120 Watts of standby power, that’s £120 you’re paying out each year that you don’t need to, and that money could stay in your pocket simply by turning things off! And you can feel good about saving the planet at the same time – a “win win” situation!

It became apparent very quickly that HomeCamp was not just a one-off event: it really created a buzz – not only amongst the people who were physically there, but many others too through the live streaming, video replays, twittering and blogging that surrounded the event. Homecamp now has its own web site and plans are already being formed for HomeCamp09, which will be in March next year.

Thanks to Yellow Park, Andy Piper and Benjamin Ellis for use of their photos.