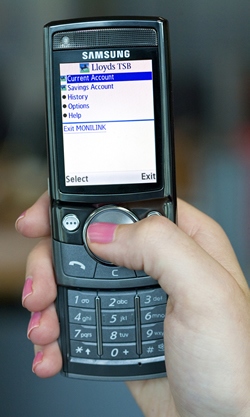 Many financial institutions have long promised the ability to bank via your mobile, well now it’s a reality, at least for LloydsTSB customers (so presumably also for HBOS customers soon following their recent acquisition).

The mobile banking app is a Java application that should run on most mobile phone, well ones that support Java.

The application isn’t very exciting, it’s just a series of menus and each menu give access to a variety of sub menus and eventually your banking details.

On the system sent for review there were two accounts, a current and savings which were each accessible from the main menu. Money can be transferred between these accounts as well as viewing balances, mini statements and even topping up a mobile phone.

Cards can be added from the options menu, which after a series of checks will be added to the menus, so transfers and balances can be checked via the client.

Though the system is only a demo (it’s a real client running against a dummy back-end – giving journos access to a live bank system isn’t a good idea, unless Lloyds like having their cash reserves drunk dry) it does work well and it’s easy to use. 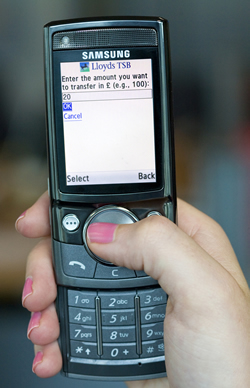 Initially setting everything up via a traditional on-line system is probably the best route and then using the mobile client to just check things or move cash around when you’re on the move.

It wasn’t possible to check the security, though the system requires a pass code to access the software. Hopefully the software uses SSL and other security technologies to ensure over air transmissions are safe.

Overall the software works and is quick and completely usable for monitoring a current/savings account and performing basic acount housekeeping. 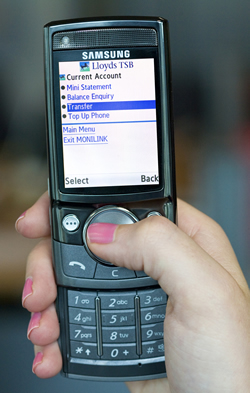 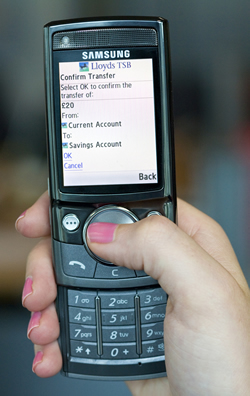